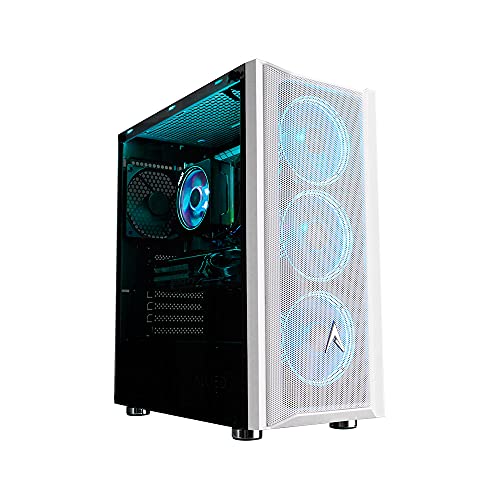 Read Allied Patriot gaming PC review and see the price. Allied Gaming is one more brand that you might come across when looking around for desktops of the prebuilt category.

They make custom gaming and high-performance desktops, and this puts them in competition against some of the prominent players like iBUYPOWER and CyberPowerPC.

However, they do stand out from the competition, and the reason is their customer support.

The brands we mentioned may be popular, but they are also well-known for not being able to provide a satisfying enough after-sales experience. With Allied PCs, however, you are free from things like that.

And while exact performance numbers have not been revealed by the brand, the spec sheet does look good on paper, and in terms of value, given its price tag.

This is one of the Patriot desktops from Allied, and there’s also the Stinger range, and there’s the M.O.B.A option, which would be more preferred if you need an ATX chassis, and are looking for higher specs.

You can get one of these from Amazon, where this one, alongside other products from the brand, is listed as prebuilt desktops.

Allied’s website allows you to upgrade over the base specs, and so better customizations are available here.

The desktop has the latest specs, and even 11th gen options are available. Also, given the places where it has been listed, we must say that it has some legitimacy.

The brand claims to have tested each of its devices and offers extended warranties as well.

We also have a dedicated user review section below which might be of use to you. But how good is it for the things that you may have in mind? That’s what this review aims to answer.

Beware of: Average connectivity │ Can be expensive

Best uses for: Gaming, Call of Duty, Esports games and other purposes.

The Allied Patriot Gaming PC looks good both in terms of exterior design and internal hardware and thus is meant for those of you looking for a ready-made rig, without having to build it yourselves. Should you get it, however, know that even though it may a good performer, it isn’t very impressive in the connectivity department.

Allied only offers you a handful of case designs, and depending on the kind of hardware you choose, its size would be determined.

The Patriot, for example, uses a big enough chassis that supports ATX motherboards, and multiple other future upgrades as well.

The brand claims the chassis to be of “premium steel construction” but we weren’t able to determine how premium it is.

It is, however, very simple and convenient like you’d expect from a gaming PC. The glass panel on one side can be removed easily for internal access, while the other side is an opaque metal casing.

The white chassis has got 3 RGB intake fans at the front, and one exhaust radiator at the back.

Now getting one of these configured directly from Allied’s website can offer you a liquid-cooling upgrade, which alternatively, you can also do later on.

Given the specs, the desktop does a decent job, and we didn’t notice any major cases of abnormal heating either.

The front panel lets in a lot of air, which gets to flow freely inside the chassis. And the only logo or branding is an “A” shaped symbol placed here.

If you get a desktop with the kind of specs that this one has, you are certainly hoping to achieve a certain kind of performance.

Good for you, as the desktop certainly doesn’t disappoint, but it’s not flawless either, the first of them being the pre-installed trial version of Windows.

It is a cheaper alternative to the Core i9-10900K, though performance figures between the two are almost at par.

The latter does perform better in certain scenarios, but for some people, the difference is not worth the extra price.

Now the Core i9-10850K is a very quick processor with turbo-boosted frequencies of up to 5.2 GHz.

And not just that, it can also be overclocked, however, these chips have thermal issues that follow suit, once overclocked.

And while this shouldn’t deter you from tampering with it, make sure you upgrade the cooling system already present.

Then there is the RTX 3070 video card, which itself is a great GPU, from both budget and performance standpoints.

With 8 GB of VRAM and over 5800 CUDA cores, this GPU can effortlessly run-heavy video games at high settings and frame rates.

The good thing is that with the kind of processor present, there is no need to worry about bottlenecks.

These include Call of Duty, PUBG, and other eSports or non-competitive titles that you may want to play.

The specs are slightly overkilling on 1080p, but are excellent for 1440p or even 4K. Although the specs are not ideal for the latter, you can enjoy a few popular games at 4K 60 fps, if you play casually with a few graphical elements reduced.

And not just that, the desktop can be used for content creation as well, and other things like 3D animation, graphics rendering, and so on.

The 16 GB of RAM present should support all of this, but adding some more memory wouldn’t be too bad if you are to use the desktop for intensive things.

The Allied Patriot gaming desktop has got a 1 TB SSD installed, though there are vacant slots for additional hard drives or SATA SSDs.

The 16 GB RAM can also be expanded, and that too can be done just by opening the glass panel.

As mentioned above, the Allied Patriot does not come with a USB Type-C port, but don’t let that dishearten you.

Because it has several other ports that would be useful. There are a total of 6 USB 3.1 ports on it, 2 USB 2.0 ports, and the other ones like headphone/mic port and such.

The desktop has also got inbuilt WIFI, an Ethernet port, and multiple video inputs as well.

These may be different depending on the GPU, but in any case, you should be able to use multiple monitors.

The audio output on this is 7.1, so you can get a stereo setup.

The RGB lighting on the case has got 16 patterns which make the desktop look even better.

The desktop comes with a 1-year warranty too, which again, can be extended should you choose so.

What Do Users Think About Allied Patriot Gaming PC?

The Allied gaming desktops have often proven to be the understated kind, and the Patriot that we have reviewed is also an underdog among the big names.

And even though not many people know of it, the views of those that do are very relevant.

The buyers of the desktop were impressed by the simplistic design, especially those that prefer easy upgrade and maintenance provisions on their PC.

The RGB lighting, glass panel, and all that made the desktop look very attractive. And at the same time, the chassis was found to be durable and of good quality.

A lot of buyers agree that the desktop looks more premium than it should be, given the price tag, while some think a few changes would have been better.

This variant is configured with high-end specs, and the buyers expected a similar performance too.

Well, the desktop proved to be trustworthy and performed mostly to their expectations.

The users could enjoy heavy gaming, and run other intensive tasks as well.

And though the desktop can be overclocked, a majority of the buyers haven’t done any such thing.

We would suggest that you don’t either unless you’ve upgraded the cooling facilities that the desktop already has.

Connectivity is one of the areas where the buyers unilaterally think that improvements could be made.

A desktop with such specs deserved WIFI 6, or at least a USB Type-C port, and the absence of both is outrageous.

The after-sales support was found to be responsive, which is otherwise an area of complaint about desktops like these.

Hence overall, the PC proved to be a good purchase for a lot of the buyers.