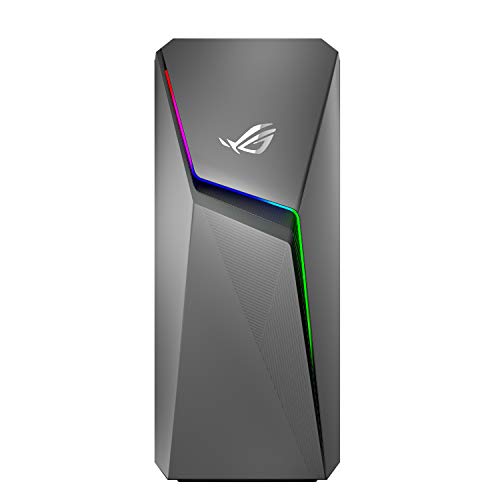 Read Asus ROG Strix GL10CS gaming desktop review and see the price. The brand that everyone turns to for gaming laptops has some contribution to the gaming desktop arena as well.

The reliability of the products Asus manufactures is evident from the reactions of the customers, and today we have another device from them.

This variant of the Rog Strix GL10CS has specs ideal for entry-level gaming, and the good thing is you can make upgrades later when you deem fit.

There are other models with better processors, GPUs, and more RAM but the one you see here today also has a mighty 8th gen i7 CPU, 8 GB of memory, and a lightweight GTX 1050 GPU.

Now the GPU isn’t the one that one would usually choose for a build, but as you will see that for 1080p gaming it works fine.

What it cannot offer for performance, it tries to suffice with connectivity and hence you get multiple useful ports.

This is no doubt a great machine for gamers who are restricted on budget and are beginners.

However, for those who want some power, the right thing to do would be to either opt for the GTX 1660 Ti option or make a different GPU upgrade later on.

You may also consider replacing the hard drive with an SSD since a gaming machine with a mechanical drive is not what one would prefer.

Having said all this, let’s see how good the device is! Check out best gaming desktop brands.

Beware Of: Limited power of the GPU│No glass panel for access to the parts inside

The Asus ROG Strix GL10CS is one of those gaming rigs that would be of use to you for a long time, given that you make appropriate upgrades. However, with so much competition, some of its aspects like the GPU give a vibe that it is lagging behind the rest.

The case of the ROG Strix GL10CS is good because of multiple reasons. Firstly, it looks attractive due to the RGB lighting at the front.

Secondly, it is compact and can be easily stored, and thirdly, it has got enough space for you to make future upgrades.

The build of the case is metallic which feels sturdy enough, and at the front, you see an RGB lighting strip in the shape of a lightning bolt. A ROG logo is also present over it.

There isn’t a glass panel, but instead, you get a ventilated side cover that helps both in cooling and letting out some of the RGB LEDs from inside the chassis.

You can control the RGB lighting scheme of the entire rig along with those of the peripherals through the dedicated software from Asus.

There are ports both on the back and at the front so that you have no trouble in connecting the useful devices.

But this isn’t an overclockable CPU, so those who were expecting to overclock it would be disappointed.

Nevertheless, it is a decent processor that you can use both for gaming, editing, and other everyday purposes.

The GPU, one of NVIDIA’s GeForce GTX 1050 is as good as can be expected from a GPU of the lower-tier.

However, it doesn’t support VR or streaming, and you would have to drop the idea of gaming at 1440p.

The gaming performance with the GTX 1050 is one of the mixed results, but for a comfortable experience, you would have to keep the settings on low while playing on 1080p resolution.

For example, in the said graphics settings, racing games like Forza Horizon 4 and Project cars can be played at frame rates well above 60 fps.

However, other games like Witcher 3, Battlefield V, and Red Dead Redemption II would be just around the 60 fps mark, but can barely touch it.

Yet others like PUBG scores 60 fps only when played at low settings. So, low settings and 1080p is the area that you would have to dwell while gaming.

You may try some video editing, but those would be at a pace just above the basic level.

The 2 GB GPU isn’t really something that you can do a lot of 3D modeling or editing with.

Thus video editing would be fine at 1080p, but for professional usage or 4K edits, you might want to upgrade to the GTX 1050 Ti which is about 25% better than this one.

The processor used, that is the Core i7 8700 is a very capable CPU, and you would be able to utilize it entirely only after upgrading the GPU.

The GTX 1050 is largely obsolete now and is seen to be bottlenecked in most scenarios. Its use with desktops has slowly, but surely come to an end.

Windows 10 OS has been installed already for you to use with this PC.

The storage available is of 1 TB in a hard drive operating at a speed of 7200 RPM.

Even then it isn’t as good as an SSD and you have to add one such for faster file processing and boot ups.

But there is an option to buy an SSD variant in case you need the best speed from the very beginning.

Though you don’t get much initially, some upgrades over time would make sure the rig remains to be of great use.

The following are the ports that are available on this PC:

So these were all the I/O that you would get. Again, a Thunderbolt 3 port is missing here and so are USB Type-C ports.

The Rog Strix GL10CS has an optional glass panel that may choose instead of the ventilated side cover.

A keyboard and mouse come in the packaging, though they are generic ones.

The RGB lighting of the rig itself and those of the ROG peripherals (should you buy them) can be controlled by the ROG Armoury Crate software that has also some other functions.

Asus has designed a newer thermal system in which the chassis is divided into two separate chambers, the upper part storing the CPU and GPU, while the hard drive and the PSU are present on the lower section.

This allows for more airflow and thus better cooling.

There is also DTS:X support for headphones so that the user can experience 7.1 surround sound on headphones.

A standard 2-year warranty has also been provided by Asus.

What Do Users Think about Asus ROG Strix GL10CS?

Even though the Rog Strix GL10CS wasn’t launched very recently, it still has some demand.

This is because the users have liked its features and the fact that it is available in such a pocket-friendly price.

The processor may not be the latest but it still has got enough power for games and other applications.

Many have opted for better graphics though since the GTX 1050 seems to be insufficient at times.

The easy RAM and storage upgrades also made it very convenient. Check out ROG GL10CS manual.

Another aspect was the RGB lighting present already, and since gamers have a liking towards it, it was an excellent addition to the rig.

The variant with a glass panel was found more attractive for the same reason.

However, some were dissatisfied as there weren’t any USB Type-C or Thunderbolt ports.

Other than that and the GPU (in this variant), the overall impressions were good.

Now surely there are better options, but as an entry-level PC, it was decent.

Even if one could build a PC in with the same specs, the price difference wouldn’t have been too great, but some parts could have been swapped with better ones.

The users thus found a PC that they could use for entertainment and work at the same time, and with some upgrades, it functioned even better.