The combination of a powerful AMD Ryzen 7 processor and an equally efficient and powerful Nvidia GeForce RTX 2060 graphics card provides ample power to it to handle any demand of the users when they work or play games like Icewind Dale on it. It is always ready for work or play, and will even allow you to customize your play.

Though the battery life of it is pretty less than ample, the Type C charging ability of this system will keep you and the system running on the road.

The display of the system is quite fast and offers an incredibly smooth imagery that will enhance your gaming experience.

The audio system of this machine is also pretty decent in performance. You can even amp up the performance of the two front-firing speakers to have a more immersive audio experience.

The system also offers strong, comprehensive, and reliable connectivity options that are essentially required for working or gaming on the go.

You can play the game or work on this system for a long time at a stretch and still the system will not become hot very easily. It is due to the ROG Intelligent Cooling system.

You will have all the support while navigating through the game or while doing any other computing task on this laptop due to the durable keyboard which has large keys that are spaced out properly.

With all the aspects of a laptop that makes it a great tech ally of the users well covered, this specific model is truly one of the most dependable gaming laptops that offers a better price to performance ratio without burning a hole in the pocket of the users. 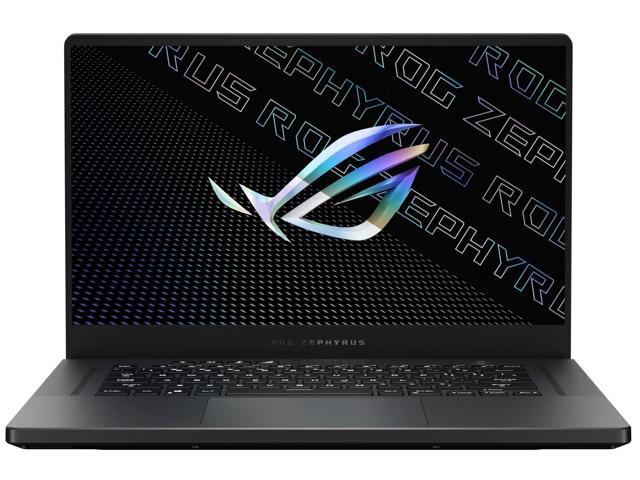 Considering the price of Asus ROG Zephyrus G15, it is a good laptop to invest on with a 240 Hz screen and good technical specs. It can run almost all games smoothly without needing too many upgrades, which however, is difficult.

The small chassis of this extremely versatile and affordable model will attract the eyes of others with its subtlety and elegance.

The look of this laptop is just like the previous version and the build quality is also pretty same. It comes with an aluminum lid and the rest of it is made from plastic.

However, this does not make it less durable or look cheap and flimsy, though a magnesium alloy base would have been much better.

The small dimension and a 19-mm profile are just good enough to hold a processor with 8 cores and a mid-range Nvidia graphics card, though it is not the thinnest of laptops out there.

This is a hybrid device that is carefully engineered, designed and built to support running popular games like Icewind Dale and allow doing everyday computing work both for amateurs as well as professionals who are into content creation or gaming alike.

The display of this system offers seamless images at a blazing fast refresh rate of 240 Hz and 3ms overdrive response time.

It also makes computing and gaming much smoother due to its adaptive sync feature. Add to that, the Pantone validation ensures more accurate colors and impeccable images that are required for playing games, media work, and more.

The keyboard of the laptop, on the other hand, is also pretty durable and will offer a smoother typing experience and better navigation through the games due to its white backlit keys.

These keys are pretty large and have a decent travel distance and tactile feedback.

The desktop-style keyboard has proper spacing of the keys that allows easy and faster typing even by people having larger fingers, though it does not have a separate numeric keypad.

The Overstroke technology and n-key rollover feature ensures faster and more accurate responsiveness with every press on the key or multiple keys.

The trackpad of the laptop is quite large but average in performance. It is however located at the center to allow better and faster navigation through the game.

The speakers and ventilation grills are at the bottom which is somewhat blocked when you use the system on a flat surface.

And, since the hinge does not come with an Ergo lift design, you should be careful about the heat buildup when you use the system for a long time on a flat surface.

The performance of the Asus ROG Zephyrus G15 is quite high and will differ according to the model because you will get other models with a different set of specs including memory, storage capacity, processor and graphics card.

The H and HS variants are almost the same in performance but the only difference in them is the TDP which is cut down from 45W to 35W.

However, given the power that these CPUs have, you will hardly have anything to moan about your CPU options.

This processor comes with 8 cores and 16 threads to allow faster Hyperthreading at a speed ranging between 2.9 GHz and 4.2 GHz.

However, the Nvidia GeForce RTX 2060 graphics card in this model ensures a faster, quieter and better image rendering.

The Nvidia Turing GPU architecture ensures a higher level of realism in comparison to other old rendering techniques with its 6 GB GDDR6 video memory and ROG Boost technology that lets it operate at a base and boost frequency of 982 MHz and 1198 MHz respectively.

And, the Windows 10 Home operating system will continue providing adequate support while gaming as well as while doing any computing tasks with its useful features.

It comes in 2 slots where 8 GB of RAM is soldered onto the motherboard and that on the other slot can be replaced, though reaching it can be a bit of an issue.

The 1 TB M.2 NVMe PCIe 3.0 SSD storage is pretty fast to boot up the system as well as offer a lot of space to store the files, folders, images, videos, and a couple of games.

This is also a good bargain because most of the gaming laptops within this price range typically come with either a maximum of 512 GB SSD or 1 TB HDD storage.

The selection and inclusion of ports in this laptop is pretty decent.

On the left side of the chassis, you will find a charging port, an HDMI 2.0B connector, a USB Type A 3.2 Gen.1 port, an Ethernet port, a USB Type C 3.2 Gen. 2 port which comes with charging and Display Port capabilities, and a 3.5 mm audio combo jack.

On the right side, there is a Kensington Lock and two USB Type A 3.2 Gen.1 ports.

To offer a strong and stable wireless data transfer, the system also supports Bluetooth and wi-fi wireless standard of 802.11ax.

The 76-watt-hour, 4-cell, lithium-ion battery of this system will typically last for about 5 hours, if not less, and that too while using the machine for low workloads and at a half battery saving capacity. For gaming, browsing, and downloading, it will last even lower than that.

The laptop stays cool even under extended use or under pressure due to the ROG Intelligent Cooling system.

This is highly efficient in maintaining the thermals just as desired so that no heat related issues hinder its performance and the user experience.

It comes with unique self-cleaning technology and anti-dust tunnels which enhances the cooling performance of it as well as the stability of the system along with the dedicated heat pipes and larger cooling fans with as many as 83 blades.

The ASUS ROG Zephyrus G15 comes with dual front-firing speakers. It is powered by the Smart Amp technology.

It helps in controlling the thermal and excursion limits of the speakers to prevent them from damage.

The High-Resolution Audio certification ensures louder sound with more bass and higher dynamic range. Even if you use headsets, you will hear high-quality sound that is deeper, richer, and with more details.

The system design also includes dedicated hotkeys that are easily accessible to help the gamers make the right move at the right time and feel right at home.

The ROG Armory Crate software in it allows easy customization and control of volume and microphone mute.

This system comes with a one-year warranty of its parts and labor for manufacturing defects only.

However, please do check whether the warranty is valid to your region because its international warranty is restricted to a few specific countries.

What Do Users Think About Asus ROG Zephyrus G15?

Few users spoke highly about the monitor of the laptop and praised Asus for doing a good job.

The performance of the screen is quite good to deliver clear and sharp images that makes both game playing as well as computing on this machine a real pleasure.

It is adequately bright and the colors are not over saturated. The screen looks bigger with its thin bezel but they regretted that it did not come with a webcam.

Offering a better price to performance ratio, most of the users were happy with this laptop and their purchase.

Though they said that the system had a pretty average battery life and needed to be plugged in most of the time to get the best out of it, the decent set of specs and the overall performance of the system made them quite happy.

This laptop comes with enough RAM and storage to allow smoother multitasking and a faster performance, said a few users.

However, they said that it needed a higher amount of RAM to do some heavy multitasking on it, especially while using a demanding software.

Having said that, they added that installing a second stick of RAM is also quite difficult since the bottom panel of it is not module based and needed exposing the entire motherboard for it. Screwing everything back was equally difficult.

The keyboard of this laptop is quite nice and offers a much better typing experience, said a few users.

It has nice and large keys with a decent travel distance. The white backlights make it much easier to locate the desired keys in the dark and therefore allow easier navigation through the game in dimly lit settings.

However, the absence of a numeric keypad made it a bit difficult entering data fast, they said.

The fans in the cooling system of this device are a bit of a bother to a few specific users.

The fans start off pretty fast while booting up the machine for the first time. Check out ROG Zephyrus G15 Manual.

However, it does get moderately loud after some time, especially when the load on the computer is increased. As for the other aspects of the machine, they were reasonably pleased.

According to Engadget, this system is quite good. It is slim and lightweight even with the hardware included in the chassis. However, they feel that the poor chassis and ventilation design hinders the cooling operation.

The screen of this laptop is quite good and responsive, feels The Verge. The color and brightness have the right balance for gaming. The CPU and GPU perform quite well but the battery life pulls it back a bit from being the best of all.

This is a laptop which has most of the things right, feels NotebookCheck. The screen is good, the build is sturdy and light, the keyboard is good, and it has a lot of connectivity options but a webcam and numeric keypad are missing.

ASUS ROG Zephyrus G15 Review: The gaming laptop you should be buying this year - XDA Developers

ASUS ROG Zephyrus G15 Review: The gaming laptop you should be buying this year  XDA Developers...