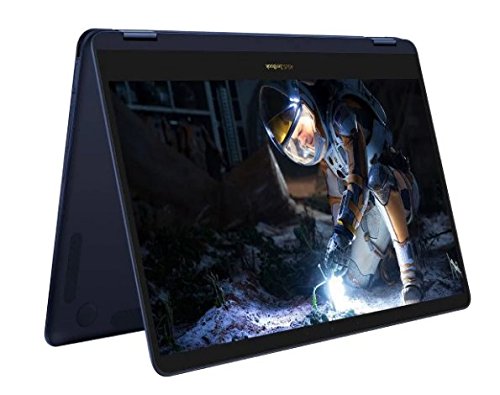 Get it from Amazon

The ASUS ZenBook Flip S UX370UA 2-in-1 laptop is a brilliant-looking, compact device that wouldn’t let you complain about its performance either. However, it fails to impress us in terms of battery backup, and the choice of ports on this device could also have been better.

Asus’ ZenBook Flip Series is another great convertible option that has competed against the best in this segment.

And now several iterations and revisions later, these are still the top contenders in the 2-in-1 laptop world with their solid design and performance qualities.

Today, however, we will be turning the pages backward and reviewing the ZenBook Flip S UX370UA, launched back in 2018. Yes, the launch date may sound alarming, but the laptop had certain features that most others of that time missed.

Of course, anyone would prefer the latest Flip convertibles over this, but don’t leave just yet.

One of the very important things about the device is that it is very compact, and the 13.3-inch display lets you use it almost anywhere, on your lap or a small desk. And its performance makes it one of the best 2-in-1 gaming laptops if you’re interested in such devices.

And although its price tag at the time of launch wasn’t exactly competitive, the laptop offered more in it than others of the same kind. Like the 4K display and quick charging support.

ASUS proudly marketed its thin nature, and it is surely among the top thinnest convertibles ever made.

However, current prices aren’t the most justifiable, and frequently change depending on when, and where you get it from.

Best uses for: Low end gaming, students and other purposes.

The ZenBook Flip S UX370UA is a convertible obviously, and looks very premium, and is very comfortable to use as well.

You’d see a familiar Royal Blue color on the chassis, which Asus has used in some of its other notebooks and laptops too.

The touchscreen 13.3-inch display is one of the most interesting things about the laptop, and like a proper convertible, goes back to a full 360 degrees.

So effectively, you get a laptop that can be folded back and used as a Windows 10 tablet.

Even the power button and fingerprint sensor are on the side, which is usually the case with most tablets today.

The bezels are thin, and the viewing angle range is great. So even though small, the FHD screen lets you consume media to your heart’s content.

There is a golden branding of Asus on the lid, and borders of the same color on the base section with the keyboard. This makes the laptop look all the more elegant.

This convertible from Asus does cost more than other 2-in-1 laptops of its time, but no doubt there is that premium feel every time you touch or pick it up.

The aluminum chassis, color scheme, and overall in-hand feel make it one that you’d want to carry to any place with a luxurious setting.

And, it is quite durable at the same time too, with better than the average tensile strength of the chassis, and the ErgoLift hinge offers a better typing experience.

As for the keyboard and touchpad, these are also satisfying, and there’s backlighting on the keys as well.

But look out for fingerprint smudges, as the chassis tends to retain those.

This is the Core i7 variant of the ZenBook Flip S UX370UA laptop, although there’s also a more affordable Core i5 option present. Now surely that isn’t as powerful as this one we are reviewing.

There’s 16 GB of LPDDR3 RAM in this, as well as a 512 GB SSD. Asus also offered options up to 1 TB storage on this, but it’s doubtful if you’ll find one of these anymore.

So it is plenty powerful for daily usage, and you’re free to open multiple applications at the same time, or many browser tabs, without the thought of the laptop slowing down.

And as there’s Windows 10 Pro installed, the OS stability or security does not need an introduction.

However, if you’re looking for a robust performing laptop, then this isn’t meant for you, and you’re better off with a performance-oriented device instead.

But this shouldn’t stop you from occasional editing and gaming sessions, as long as the stuff you run is compatible with Integrated Graphics.

And the FHD display is also cooperative, with decent color accuracy and brightness levels.

The things being viewed on it do not feel dull, or overly saturated, which is a good thing. The touch response is excellent too, so multitasking, switching between tabs is very comfortable if you’re using your fingers or a stylus.

There’s also a 4K variant that was launched, at a higher price of course, though its availability in the current market is uncertain.

Now although the laptop does not have any major drawback in thermal management, the base part, especially the area in and around the keyboard does get hot.

It even feels uncomfortable upon continuous intensive usage, and there’s the fan noise that also seems to bother you by this time.

As we said, there’s a 512 GB SSD on the Asus ZenBook Flip S UX370UA and 16 GB of RAM, both of which perform well in their respective roles.

The storage and 2133 MHz RAM frequency do aid in providing better overall performance.

While the SSD is removable, the RAM is soldered to the motherboard so no upgrading is allowed.

But as there’s plenty of RAM in the laptop already, that wouldn’t be necessary either and you wouldn’t face any issues as such.

To upgrade storage, you’d have to remove the 4 screws holding the back panel in place. After that though, it may need some additional effort to pry it open.

The connectivity department on the Asus Flip S UX370UA can be considered lacking, especially as per 2021 standards, as there are only two USB Type-C ports on this.

These aren’t Thunderbolt supported either, so there’s limited functionality. They do support 4K displays though.

Other than that, there’s only the 3.5 mm jack for a headphone, the power port, and nothing else.

There is however Bluetooth and WIFI inbuilt which would be of use to you.

The laptop packs a 39Whr battery which again, is not something particularly impressive.

Now depending on usage, it may last through the day, giving you 4-5 hours screen on time on the battery.

But when compared to its competition like the Spectre X, the battery performance isn’t at all interesting.

With the USB Type-C power adapter already provided, it takes about 2 hours to charge the laptop fully, while Asus claims that 60% of the battery can be charged within an hour.

One of the most striking features of this laptop is the Harman Kardon tuned speakers, which although down-firing, offer impressive loudness.

The sound quality overall is very balanced, with distinct highs, lows, and bass, and there are no distortions in higher volumes either.

On the other hand, the VGA webcam makes you look dull on video calls, and we wouldn’t recommend using it even for casual video calling.

Asus really could have found other places to cut production costs instead of here.

There’s some software installed on this out-of-the-box, like the Quiet Fan. With continuous intensive usage though, challenging the brand’s claims, it is hardly effective to keep fan noises down.

There is Windows Hello and fingerprint recognition for easy, and secure access. Also, you get a standard 1-year warranty on the Asus ZenBook Flip S UX370UA.

What Do Users Think About Asus ZenBook Flip S UX370UA 2 in 1 Laptop?

The fan base of Asus is a large one, and convertibles are very popular products of the brand too.

The ZenBook Flip S is not the first of its kind and is not perfect either, but the kind of reception it got from the buyers is huge.

The design, for example, is simply loved by the buyers. They had no second thoughts in their mind that there could be another more beautiful laptop that they could have bought.

Everything from the chassis quality to the overall looks of the laptop proved to be very premium indeed.

Next comes the overall convenience, which is yet another thing that this convertible laptop could provide the buyers.

Sure it is compact, foldable, and easy to carry, but what sets it apart from others of its kind is its thin and light form factor.

The buyers have expressed no displeasure when talking about the laptop’s performance, though many have preferred the Core i7 variant over the less powerful Core i5 one. Now the price, they believe, could have been made more affordable.

The display, speaker quality, fingerprint sensor, all seem to impress the majority of the users. However, the sub-par webcam quality was a point of concern to them, as it is for us.

Now further disregards have been noticed about the connectivity, and especially the battery department.

The users say that the few ports often required them to carry a USB adapter which isn’t convenient all the time.

And the battery life, considering the kind of a device this is, surely could have been a little better. Check out Asus ZenBook Flip S UX370UA 2 in 1 Laptop Manual.

There’s also a heating issue that has been encountered by many, and the fan noise too wasn’t very appreciated.

As per IT Pro, the Asus ZenBook Flip S UX370UA brings in luxury, but you’d have to pay for it with a considerable amount of money. There are little flaws in it when looks are concerned and it’s suitable for various kinds of usage, but there are problems like heating and battery backup issues that you have to face.

The expert at Digit says that the ZenBook Flip S UX370UA is a device that you’d love to use if you have a dynamic lifestyle. It has got a great display and speakers as well so there’s no shortage of entertainment, and it performs well in other tasks too. But the ports and the battery backup are things which you won’t like as much about it.

When the views of Tech Radar are concerned about this laptop, they do like a lot of things about it like the other experts. And while it has good looks and performance to offer, the fingerprint retention on the chassis and the battery life needed to be worked upon.