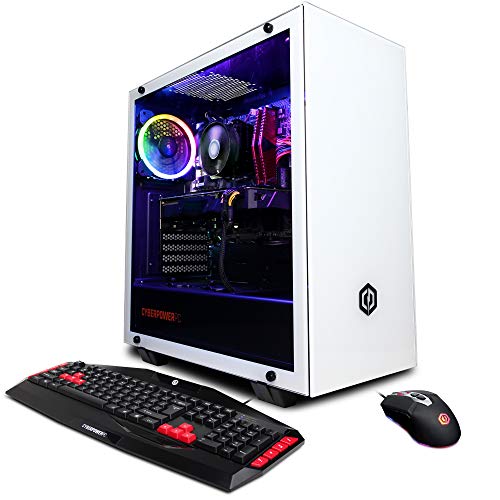 The CyberPowerPC Gamer Master GMA1400A comes with features that can ensure a satisfying performance for the average gamer. The use of standard hardware and ease of access to these makes everything convenient, but it isn’t that impressive if you’re looking for the latest connectivity in your new desktop.

If you fancy a prebuilt gaming PC, then you must have heard of CyberPowerPC at some point.

And while it may not be as popular as the big names in this industry, it does make some decent rigs, many of which we have reviewed on our website.

For the mid-range buyers, there are those like the Gamer Master GMA1400A, which we are reviewing here today.

From a white case to remote-controlled RGB lighting, and decent performance, your setup could use this upgrade after all.

The specs of the desktop are capable of delivering mid-range performance, as much as you’d expect from a Ryzen 5 3600, and a GTX 1660 video card.

These are at the helm of handling general processing and graphics respectively in this PC, and there’s 16 GB of RAM and an SSD accompanying them.

These are all standard ones, so an upgrade, later on, shouldn’t be a problem. Overall, it is a quite convenient gaming PC, but there are some typical issues that the desktops of the brand share.

To give you a heads up, the mouse and keyboard, although present, are still the average ones.

In the following sections, we would look in-depth at each of the strengths and weaknesses of this gaming PC, and by the end, you’d know if this is the one for you.

Buy for: Decent specs │ Can be upgraded with better hardware

Best uses for: Civil Engineering, mid-range gaming and other purposes.

The Gamer Master GMA1400A uses one of those cases that you’d only see in CyberPowerPC desktops.

Like most other gaming chassis that the brand offers, this too has got a glass side panel and fans not at the nose-end, but the side.

This ensures better cooling, and the solid front panel comes in white, and there’s a CyberPowerPC logo here.

The borders at the sides are in white as well, while the interior is black. So if you prefer a touch of contrast, then you’d love how the desktop looks.

On the top, there’s a vent where another cooling fan can be added, although the cooling by default is sufficient for the hardware installed in it.

We would talk about said hardware in a little bit, but design-wise, we didn’t find any major flaw in this desktop.

The glass panel can be opened easily too, so the internal components can be reached.

There are ports at the front as well, and even though a USB Type-C port isn’t present, there are other ones that would be of use to you.

Now there is also RGB lighting inside the chassis, and on the radiators for cooling, which can be controlled via a remote.

We don’t have any such issues with having to press buttons for a different color effect, although some people prefer doing the same through dedicated software.

Combined with all this, there’s also good cable management inside, which sums up the design aspect of the desktop. Feel free to comment below on how you like it.

The Gamer Master GMA1400A may be labeled as a gaming PC, but with the specs it comes with, other things can be done on it as well.

Now, these are the mid-range kind, so the desktop is not meant for high-end usage. But even then, it can be used for quite some heavy-lifting.

Now that the Ryzen 5000 series is here, most people would prefer these over the previous-gen processors.

But what they might not know is that the Ryzen 5 3600, was one of the best of its kind, not so long ago.

This 6-core, 12 threaded, the processor was preferred by many who wanted a good CPU in the budget segment.

With turbo-boost, you can get a frequency of up to 4.2 GHz, and you can overclock it as well.

And to get some noticeable results, you need not go to extreme ends either, which is great if you’re a beginner at this.

Also, the cooling fans, although noisy at times, do a great job at keeping not just the CPU, but every major component cool under the workload.

Then there is the GTX 1660 GPU in this, and we would have preferred if it was at least a GTX 1660 Super, given the price tag of the device.

Now given the current  GPU trends, with a CUDA core count of 1408 and 6 GB of DDR5 VRAM, we wouldn’t call it a bad video card right away.

It is a great choice if you get it cheap, and can prove to be efficient for non-professional gamers.

It can provide way more than 60 fps on most modern titles at 1080p at High or Ultra settings, depending on the game.

However, we wouldn’t recommend 1440p gaming on this, unless you are playing casually not caring about frame rates. And so 4K is out of the question.

And while it does not support ray-tracing, things such as – video editing, 3D rendering or modeling, or software that are needed in Civil Engineering can still be run on this, but not too heavily.

And, there’s enough RAM on this, which can also be upgraded so the CPU can keep going for long sessions, without having to slow down.

With Windows 10 Home OS installed, you can use the desktop for a variety of supported applications.

The storage in this is 500 GB, and the PCIe SSD that provides it is quick.

This should give you additional speed when turning the desktop on or off, or opening different software, etc.

With this is 16 GB of RAM, and the most commonly used motherboards in the CyberPower Gamer Master GMA1400A come with 4 slots for memory.

In all probability, you’d find two of these are kept vacant to expand the memory of the PC when needed.

If you’re looking for a gaming PC with a lot of ports, then the CyberPowerPC Gamer Master would not disappoint.

These two are usually an HDMI and a DisplayPort, but the exact kind of video port may be different in your particular unit though.

As long as you have the right cables, 2 monitors can be easily used no matter what these may be.

The desktop is also Bluetooth and WIFI ready, which can be to your advantage.

And there are separate ports for a mic and headphones at the front as well.

An RGB gaming mouse and a usual keyboard come in the package, and other than that and a few other things, you’d also get a remote.

This is to be used to control the lighting on the rig.

This CyberPowerPC desktop also comes with a 1-year hardware warranty and free lifetime support from the brand.

What Do Users Think About CyberPowerPC Gamer Master GMA1400A?

CyberPowerPC desktops have some reputation, and the Gamer Master GMA1400A did not disappoint us.

But what’s more important is how the people who have used it think, so here’s a collection of the user views that we could gather.

They say that the desktop surely looks decent, nothing too flashy or exaggerated.

Also, it was found to be more compact than it looks, and yet there wasn’t any shortage of upgrade options.

So, if you too are looking for such features, the desktop ticks that box.

The desktop can be configured and customized in a lot of ways, and many have bought it with the same specs as mentioned in our review.

In their opinion, it handled all the stuff that they needed to run smoothly.

Many have used other professional software too, and the desktop did well.

There weren’t any heating issues, and the processor never went beyond the usual temperatures, even on extensive usage. But, the fans might bother you after a certain time.

As for the drawbacks, a few have been noted, but most of these are issues that CyberPowerPC desktops have in general.

The absence of WIFI 6, a USB Type-C port, and problems with the WIFI module are some of the things that might bother you, as they did the other buyers.