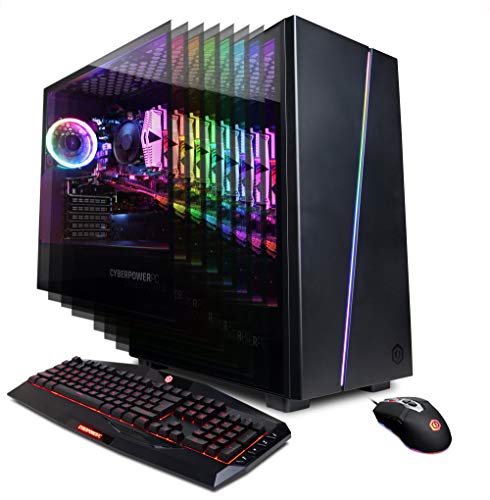 Read CYBERPOWERPC Gamer Master GMA8200CPGV2 review and see the price. If you don’t know them already, CyberPowerPC creates custom desktops for a variety of users and is one of the very popular brands too.

So if you are one of those people who want a desktop made ready for them to pick, then this review of the CyberPowerPC Gamer Master Gaming PC is for you!

This is one of the many custom choices that the brand offers you, and the good thing is that you can make many customizations later on as well. This is because of a big enough chassis, and the use of standard hardware.

The chassis used in the desktop is very simple but is still attractive, and it has got RGB lighting as well. So it has got all the features of a proper “gaming PC”, while you can do a lot of other things on it too.

The desktop has got a Ryzen 7 processor, an RTX 2060 Super GPU, 16 GB of RAM, a 240 GB SSD, and a 2 TB hard drive for secondary storage. And while these aren’t exactly the latest hardware, you still get a very impressive performance out of these.

And there are multiple ports too, with inbuilt WIFI and Bluetooth, and you can run high-resolution monitors with the video ports provided. However, a USB Type-C port is wanted here.

Best uses for: Gaming, World of Warcraft and such other purposes.

As a desktop with such convenient design and performance, the CyberPower Gamer Master can undoubtedly be your primary gaming and streaming rig. And the ample upgrade options make sure that it can adapt to your future requirements too, thus it could be of use a few years down the road as well.

CyberPowerPC desktops usually come in simple, yet utilitarian designs, and that is what you find on the Gamer Master as well.

One of the brand’s patent cases, an Eluna 241V has been used in this build. Getting this PC directly from the brand’s website can get you a different case, and other hardware, as you prefer.

Now the black chassis here isn’t something very unusual, and you still get the tempered glass panel, footpegs, and all that.

However, the RGB strip at the front and the closed front panel are what sets it apart. Now how does the cooling work then?

The desktop comes with 3 RGB cooling fans, one located at the back, and the other two at the side of the chassis, instead of the front.

And this, as long as the airflow isn’t blocked, often proves to be more effective. The lighting on these fans can be controlled via a remote that comes in the package, along with the desktop and a few other things.

The build quality is good too, and there’s tons of space inside for upgrades and ease of maintenance, and a dust filter at the top, where you may add more cooling fans.

So tackling hardware that tends to heat up is not an issue, as long as you are comfortable with the noise that may be produced with all these radiators working at the same time.

The power button and the anterior ports instead of being at the very front are kind of at the side.

Not that it causes any inconvenience, but the placement is just different than other desktops.

The Gamer Master’s one strength is the hardware that it comes with, and under the right conditions, you can expect a satisfying performance as well.

The Ryzen 7 3700X may not be as snappy as the Ryzen 5000 Series CPUs, but it is still a great mid-range processor.

It has got 8 cores, 16 threads, a turbo frequency of 4.3 GHz, and supports overclocking. A stock cooler comes attached with it, which does its job well, and given the overall cooling present, you should never have to worry about temperature issues.

With this is the RTX 2060 Super video card, which grants a slightly aged GPU, but has not yet lost its importance.

You get this 8 GB video card with entry-level ray-tracing features, that can handle most games and applications.

And although it isn’t the ideal choice now, on the bright side, when bought at the right time, the overall desktop might come cheap.

The lower price doesn’t mean that you would have to sacrifice performance since the RTX 2060 Super is still a good GPU.

You can use it to run almost any game at 1080p around and above 100 fps, depending on the game.

Others, like World of Warcraft, can be played or live-streamed at 1440p too, in this CPU-GPU combination.

Other forms of content creation, like creating or editing videos, other 3D or animation software can also run smoothly on this.

And should you feel like it, you can even try gaming on 4K, but the frame rates would be around 30-ish.

That isn’t great for a serious gamer, but casual sessions are still doable on some lighter titles.

When upgrades are concerned, these can be easily done. For example, for a GPU upgrade, you may have to replace the 600W PSU, but it also depends on what you upgrade to.

But before that, the desktop, based on the Windows 10 Home OS, can still provide an enjoyable taste of what a good gaming rig feels like.

There is a 240 GB SSD, and a 2 TB hard drive already present in this variant, along with additional hard drive bays to add more storage drives.

The RAM that you get is 16 GB, and these should be present in two of the 4 slots, depending on the model that is shipped to you.

The frequency of the RAM may also vary, though 2400 MHz is most commonly provided.

The motherboard allows you to increase this for better performance, but only slightly.

The desktop has a total of 6 USB 3.1 ports and 2 USB 2.0 ports, among which 2 USB 3.1 ports are on the front panel, and the rest at the rear. Also, there are jacks for headphones and microphones.

The video ports depend on the GPU being used in the system, so these might be different in your case, but you can still use multiple monitors anyway.

Also, the desktop is WIFI and Bluetooth ready, and you need not add more adapters after buying it unless any of these malfunctions.

On the front panel, alongside the ports and the power button, there is also a button that you can use to change the RGB lighting on the rig.

The mouse that comes with it also has RGB lighting, but the keyboard is a usual one, without these.

CyberPowerPC provides you a 1-year warranty on the device, along with free tech support throughout the PC’s lifespan.

What Do Users Think About CyberPowerPC Gamer Master GMA8200CPGV2?

The CyberPowerPC Gamer Master desktop has been used by a lot of people, and hence there have been both good and bad things that have been said about it.

The first impressions have been mostly positive, and the looks, simple setup, and all that have been appreciated.

The performance, as the users say, has been good overall. The specs, although not the latest, were modern and capable enough, and the PC performed as expected.

All sorts of tasks like gaming, 3D applications, AutoCAD, video editing, and so on have been handled by this desktop quite well.

It doesn’t have a USB Type-C port, which is something that the buyers didn’t like. But they found no shortage of other USB ports, or video ports to add more monitors. Other necessary slots for audio, Ethernet, etc, are there too.

The build quality was found to be good, and the convenient tempered glass design made sure that the users had to spend no time figuring out how to reach the internal components.

And upgrades and spare parts were found easily, as the desktop uses standard hardware.

And as always, CyberPowerPC’s customer support wasn’t all that helpful in sorting out some of these issues.

Then, some of the buyers also think that the motherboard and PSU quality could have been better, given the price one has to pay for the desktop.

And they would have also preferred if the cooling fans on the desktop were a bit quieter.