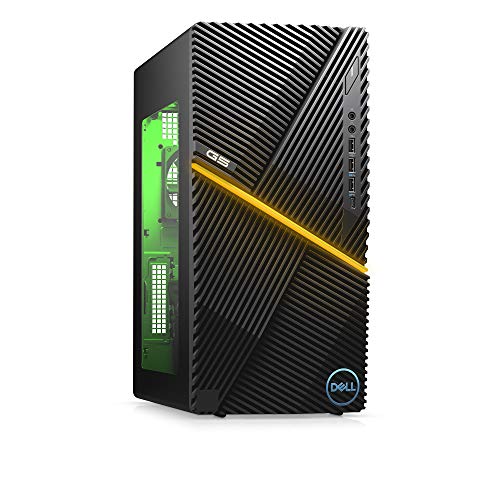 Read Dell G5 i5000-7392BLK-PUS gaming desktop review and see the price. Dell’s gaming desktop series has been around for a long time, and here we have a newer version of it, which retains many characteristics of the design and the same reliability that the older ones were known for.

There are various good things about the Dell G5, a compact size, a variety of options, easy upgradability and the list goes on.

But one of the things that we like most is the pricing, which allows most mid-range buyers to choose this without worrying about their budget.

Now it may not be as cheap as some desktops of the other brands out there, but it still provides a decent value for the money you pay.

As for this variant, we have a 10th gen Core i7 and RTX GPU as the primary configuration, along with enough RAM and storage.

These specs allow you to do a lot of things on this, something we would discuss in detail in the performance section.

But before that, we’ll be talking about what we think about the desktop and its design, so without any delay, let’s jump right to it.

Best Uses for: Multiple gaming | Autodesk Maya and other purposes

The Dell G5 is a great option if you don’t want to get involved in building a desktop and still want customizations. It may not come with the latest WIFI or extreme forms of upgradability, but other than that it seems to be a decent pre-assembled system.

Before we go into the details, we must say that the desktop here is quite compact, and hence storing it under your desk (maybe on top of it) or a small room is never going to be a problem.

What’s more attractive about it is that it doesn’t pose trouble to the user when working with the internals, even though it is even smaller in size if you consider some other micro ATX builds.

The desktop is a gaming PC, but it doesn’t have that excessive RGB flair that most others of its kind do.

Instead, there are only blue LEDs inside the metal chassis and a similarly colored diagonal strip of lighting on the front panel.

Should you need to move it, the desktop weighs less than 10 kgs. Check out best desktop brands.

This is one of those variants of the Dell G5 that come with a clear side panel to show off the components inside, while those with covered cabinets are also present.

This can be easily opened up, although the same is not true for the back panel.

There is a geometrical design on the front, and though fine by us, whether or not you’d like it is more of your personal opinion.

There are also some ports on this side, which contributes to the good connectivity present on the desktop.

This is one of the upper variants of the Desktop, and hence you get an octa-core, 16 threaded Intel Core i7 processor.

This results in the speedy execution of the many tasks that the CPU can handle at the same time.

The GPU present in this variant is an RTX 2060 Super, a good budget ray-tracing supported GPU that has 8 GB of VRAM.

With its tensor cores and better shading technology, you are sure to get an edge over other mid-range non-RTX GPUs.

The CPU and GPU combination makes the PC a powerful enough device for not only gaming but also for other editing and 3D rendering software, including AutoDesk Maya, Blender, and so on.

You can expect fast processing and acceptable rendering times when working with light to mid-sized projects.

As for the gaming performance, it can handle most games at higher graphics settings on 1080p, and a few on 1440p as well.

There would not be dropped frame rates, and the RAM present already is enough for a more than sufficient gaming experience.

Now you can upgrade to a better processor or video card, as long as you abide by the limitations of the 460W PSU.

You won’t be able to replace it with any 3rd party unit that we know of, though it is still better than the 360W one present in the lower variants.

Windows 10 Home OS has been pre-installed on the PC.

As we said, Dell allows you to customize your G5 desktop in a variety of ways, and the model that we are reviewing comes with a 1 TB SSD.

This is big enough to accommodate most of the things that you want to store, at least for some time.

When it falls short, you can always add more storage drives using the free slots and bays available for the same.

Yes, you can add both kinds of hard drives (2.5 inches and 3.5 inches) to the desktop later on.

There are three hard drive bays in total, which in this case are all free. The M.2 slot to be used for the SSD is filled though, by the storage drive in this variant.

The RAM here is 16 GB, in two 8 GB modules and a total of 4 DIMM slots are present. You may upgrade the RAM, up to 64 GB for better performance.

The ports on the front of the Dell G5 include two USB 2.0 Type-A ports, a USB 3.1 Type-A port, and another USB 3.1 Type-C port. Other than this, there is also a headphone and a microphone jack present.

At the back, there are two more USB 2.0 ports, 4 USB 3.1 Type-A ports, audio in and out ports, and the Ethernet port for a consistent internet connection.

There are also a few video ports, including HDMI, a DisplayPort, and a DVI so that you can add more displays to your setup.

There are 802.11 ac WIFI and Bluetooth 4.2 present, and while these aren’t the latest versions of wireless connectivity, for an average user these should be enough.

These can be upgraded though, so no issues here.

This Dell desktop comes with generic peripherals and a standard 1-year Warranty from Dell, which can be increased by purchasing a plan.

The keyboard and mouse are only good for simple usage, and for creative work or gaming, we would suggest you buy these separately.

There is some useful software on the desktop, like the Alienware command Centre for example.

You can use this to monitor system resources along with a few more functions.

The users of the Dell G5 found it to be an excellent gaming and productivity machine, available at decent pricing.

Various buyers have bought the different variants of the PC, based on their requirements, and other than the common drawbacks, there haven’t been any bad responses.

This is because overall, the desktop with all its features is a decent one. There is no excessive lighting, and yet, the blue  LEDs inside manage to keep its looks interesting and somewhat premium.

Any average user found that enough scopes for upgrades were possible, in the RAM, CPU, GPU, and connectivity departments.

The compact size, and yet the flexibility of working with the components inside were other advantages that the users found.

The looks of the desktop had a diverse response since while some have liked the geometric pattern and the strip of lighting, others didn’t.

Some have chosen the covered option, while others preferred the variants with the glass side panels.

The drawbacks reported were the issues with the PSU and motherboard upgrades mostly.

These two being vital components caused serious problems to those who wanted to take their upgrades to the next level, and transform this mid-range rig into a high-end one.

One other thing that some of the users had problems with was cooling, and although there wasn’t any thermal throttling, adding more fans was found to be troublesome.

The ones already present got noisy under workload at times, but not to the point that they became annoying.

The authors at Tom’s Hardware have expressed that the Dell G5 is a small-sized and affordable desktop that also offers good performance. Its upgradability might be limited, and for those of you who aren’t interested in stripping it off entirely, it is still worth it.

The experts of Tom’s Guide think that the desktop is one that can be used for both gaming and other professional purposes with ease. They do think that the pre-installed bloatware is a discomfort, and with the specs that it comes with, the device is not very suitable for UHD or QHD gaming.

As for the PC Mag, they too have liked the Dell G5’s compact design, pocket-friendly pricing, and the fact that it can be configured both for light and heavy performance requirements. Despite being small in size, the components inside can be easily accessed and this is what makes this a very interesting option to buy.

eComputerTips is reader-supported. When you buy through links on our site, we may earn an affiliate commission without any additional cost to you. As an Amazon Associate we earn from qualifying purchases. Learn more