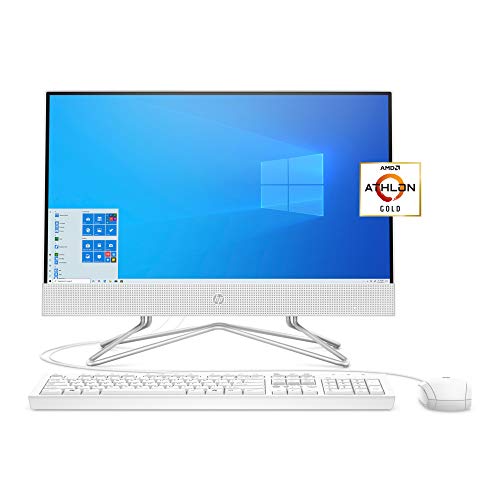 Read HP 22 DF0022 AIO review and see the price. Good computer hardware can get very expensive these days, but even then, you cannot just buy any PC from any brand just because they are cheap.

Well, today we have something that can be an excellent option for you if you are one of the casual users.

If the title hasn’t given it away already, this is a review of the HP 22 Df0022 that you must give a read if you’re also looking for a budget AIO, that doesn’t miss the necessary features.

This doesn’t mean that the HP AIO doesn’t have bad sides, but the advantages it offers suffice for these.

The first thing to notice is the borderless display, with the only bezel being the one at the bottom. This is the part that has the HP logo, and the speakers as well.

Below that, you’ll find the stand that does an excellent job at providing the display unit stable support. Also, given the overall visual appeal, it suits it.

On the inside, things may not look very attractive with the lower range spec sheet, but the performance this device provides is by no means unsatisfying.

Read on and you’d soon find out why it would be worth your time. Check out best desktop brands.

Buy for: Decent display│ Good performance for basic use

Best Uses for: Daily use | Normal use and other purposes

The HP 22 AIO PC is one that we love for basic usage, and the price tag makes for a solid argument for its favor. Now the performance that you get is entry-level only, but this can be a viable laptop alternative if you don’t need to move it around very often.

The AIOs from HP are known for their elegance, and we are sure you won’t be disappointed today either.

This entry-level All-in-One can easily be confused for a pricier device, it looks that much premium.

The 22-inch display has almost no bezels on the side and at the top, so the viewing area never seems small, although you may realize that this is a very compact device.

Being an AIO already saves space, and this attribute makes it easier to store it, even on a small desk.

The unit looks very attractive with its white coloring and is quite slim.

A slight curve is present on the rear side of the display section, not that it causes any convenience as such.

Most of its ports are at the back, and there is a DVD writer on the left side, should you still need it.

The four-legged stand allows mild alterations to the viewing angles, to the front and back, but you cannot rotate or raise it, unlike premium options.

We will be talking about the display later in the performance section.

The PC is run by an AMD Athlon Gold CPU, a typical choice for most budget laptops and mobile computers.

Now, this isn’t the latest launch, so the 14nm architecture is seen on the processor.

There is also Radeon graphics present on it, running at 1000 MHz, so this too is average.

You won’t face any issue while basic computing, but the graphics cannot be upgraded for a better experience.

While hyperthreading does come in handy when using it, you must know that the PC is mostly good for light usage.

The RAM present is also of a minimal amount, though a few tabs on Chrome and some other light software would run smoothly.

The display quality is 1080p, enough for the usual media consumption.

Watching movies, tv shows surfing social media, Youtube, and such would be a decent experience as well.

Now it has a 72% of NTSC rating, which amounts to a 99% sRGB spectrum, so you would feel an average vibrancy.

Although it is great for normal usage, do not expect to play games or run any sort of intensive software on it.

If performance is purely what you’re looking for, you’d need to consider some other option I’m afraid.

The Windows 10 Home OS should be able to provide you with a familiar and convenient user interface.

The HP AIO is a decent machine overall, but its storage space is not as impressive.

Well, 256 GB of space present on an SSD might be enough for certain kinds of people, but most average users would feel it is insufficient after a few months of using it.

Though internal expansions aren’t possible, you may use external drives.

The RAM, on the other hand, is more flexible in this aspect. The 4 GB of memory present can be upgraded to 16 GB at most, giving you enough headroom to test the limits of the processor.

The dual-channel configuration works better if you install another module, alongside the one already present.

However, that would require disassembly, and unless you have enough experience with AIOs, that wouldn’t be easy. It is thus better left for a technician to do.

The device has most of the ports that people usually need, but there isn’t a Type-C connector. Given the price range, that cannot be a very serious point to criticize, so let’s focus on what is available.

There are two SuperSpeed USB Type-A ports, a USB 2.0 port, an HDMI output port for adding another monitor, an Ethernet port, and a Headphone/mic combo port.

And don’t forget the DVD writer and the card reader which are present as well.

The AIO also comes with Bluetooth 4.2 and WIFI 5, using which you may connect to other devices or the Internet wirelessly.

The HP 22 AIO has got a private HD webcam that pops up only when the user needs it. There are microphones present as well, so video calling would not require external devices.

There are speakers present on the front side of the display unit itself and these are quite loud and clear. Unless you need outstanding audio quality, these should do.

Other than these, you’d also be getting a standard 1-year warranty from HP, wired peripherals (a keyboard and a mouse), and also some software pre-installed.

But not all of them are useful, so customizations would be needed.

We have a good general feeling about this HP All-in-One, and this has been shared by most of the users as well.

The display, elegant design, and such features were liked by those who bought it, but there were certain drawbacks that both we and they came to notice.

If you compare some others of its kind, it is quite an affordable device. This is the reason many have bought it.

Even with entry-level specs, it can fulfill a lot of the requirements of a majority of users, and this is also a solid reason for its popularity.

Certain small things, like the pop-up webcam and the speaker quality, were taken care of by HP, and this was widely appreciated.

The peripherals are decent and the price at which they are being received doesn’t give many chances of complaints.

About drawbacks, the first was about storage obviously, and more so since the motherboard wouldn’t allow upgrades regarding it.

Also, those who needed a touch-screen or better graphics were somewhat disappointed by the absence of relevant variants that had these.

Also, some improvements in the connectivity department, like the addition of a USB Type-C port would have been better.

These aren’t very critical, and the price tag at which it is offered made it a great choice for those with light computing requirements.

It is the view of those at Tech Burns that the HP 22 AIO, although affordable, has great features for those who were looking for a computer for basic daily usage. It may not be as good as an iMac but isn’t that sort of expensive either which makes it an attractive deal.