Read HP OMEN 25L Gaming Desktop Review and see the price. The pre-built gaming desktops from HP have made a name for themselves, and this is because the brand provides something for everyone.

They have powerful machines for users who are eager for more performance, while budget-oriented buyers would also find something to choose.

The Obelisk launched about a year back was quite successful, and thus the brand is back with 2 new additions, the OMEN 25L and the bigger OMEN 30L.

These two devices were launched a few months ago and they too have got multiple options.

Today, we are reviewing the smaller version, the OMEN 25L which at first look has got interesting specs at the price point.

The new i7 CPU, NVIDIA’s mid-range GPU, and 16 GB of RAM, these are some of the features of the variant we have here.

There are other options as well, starting from $899, and even higher ones flaunting RTX series GPUs. You would find both Intel and AMD processor options.

The HP OMEN 25L can be used as a robust gaming or editing rig, but the absence of the ray-tracing capability is very prominent.

With a decent gaming monitor, the PC opens up a great world of gaming possibilities in front of you.

The case won’t allow you extreme upgrades, although what you have is enough to start with. 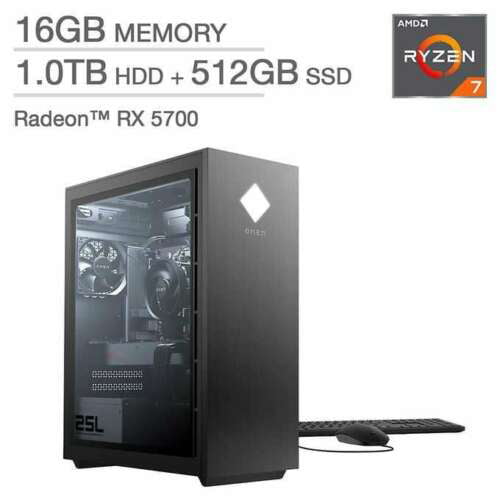 Beware of: Some flaws like absence of Thunderbolt 3 port

For a mid-range buyer, the HP OMEN 25L seems to be a worthy enough investment. As long as you intend to game within the medium settings, and keep your editing projects within 1080p the rig would be of great use.

There are rigs with flashy LEDs and futuristic cases, and then there is the OMEN 25L with an elegance of its own.

The metallic case is very simple, and one can easily misinterpret its low-profile for not having enough power inside.

There is only some RGB lighting inside that you can customize to display the color of your own choice.

There is only a single fan at the back, and while the CPU and the GPU in this variant wouldn’t be running very hot, higher ones do have some heating issues.

That is unless you decide to add more cooling fans. There is a tempered glass panel that gives you easy access to the parts inside, while also showing some of them off.

The front has the power button on top, along with some other ports. They are very easy to access.

It tends to provide gaming performance as an i9 while being cheaper than it. Also, the closest competitor is a Ryzen 7 3700X which performs slightly better, while the price difference between these two isn’t much.

Thus you get 16 threads that would be immensely helpful while multitasking. The base speed of the CPU is at 2.9 GHz and although it doesn’t support overclocking, you can turbo boost it.

The maximum speed it can achieve is 4.8 GHz. The cache size of the CPU is 16 MB, which further adds to its processing speed.

The processor doesn’t have any integrated graphics inside, and hence all of the graphical workload would be taken up by the NVIDIA GeForce GTX 1660 Ti graphics coprocessor.

This 6 GB GPU with DDR6 VRAM is much better than the initial GTX 1660, and is just below the RTX 2060 in terms of performance and pricing.

Given the specs, it is clear already that for an average gamer, these are a lot, while professionals would prefer some better graphics.

So how good is this rig? Well for most gamers, there’s good news since it can run all the modern names like PUBG, Fortnite, Battlefield V, and so on comfortably at 1080p.

The RAM usage in some games is significant, but both the CPU and the GPU need not work too hard to produce decent frame rates at 1080p which are well above the average.

In fact, if you are interested in 4K gaming then the RTX cards are your only choice. But for streaming sessions, it would be better to stick with 1080p gaming only.

For editors, well the configuration is decent as well. But again, if you are a professional editor and want the best performance, you have to invest in better specs. So it is a better device for gamers, rather than editors.

Windows 10 OS has been already installed in the device. All that you need to do is open up the packaging, make the necessary connections, and as soon as you download some updates and the necessary files, you can start gaming on it.

There is an SSD present inside the PC of 512 GB capacity. There are slots inside for you to add two more hard drives if you feel like it.

However, both the M.2 slots are taken up.

The RAM present is of Hyper X and a total 16 GB in size, since two 8 GB modules have been used.

You can expand the RAM up to 64 GB, by using the two more spare RAM slots. This is enough expandability for anything the CPU and GPU can handle.

At the front, you get a Superspeed Type-A port, along with a headphone/mic combo jack, another microphone jack present beside the power button.

For visual connections, there is a DVI, an HDMI, and a DisplayPort each so that you can also have a dual-monitor setup.

There is also WIFI 5 and Bluetooth 5 for other wireless connections.

The device has got 5.1 surround sound support along with DTS Headphone: X. No matter if you use speakers or an earphone, you would get an enhanced stereo experience that can make playing games or watching movies more interesting.

There is also VR support if you are interested in using a VR headset.

It also provides assistance regarding overclocking (depending on which variant you choose).

A warranty of 1 year has been provided with it, and so is a keyboard and mouse.

What Do Users Think about HP OMEN 25L Gaming Desktop?

The users are much satisfied with the rig and the performance it provides. The brand seems to deliver on its promises, and the specs are quite balanced when the price is considered.

It was easy to set up, and the ease of access to the internal components also provided easy maintenance.

The device was also easy to upgrade, and there was enough scope for that as well.

The SSD was fast, and those who needed more storage could also add more hard drives.

However, those who had bought higher variants had some problems with cooling. Check out HP OMEN 25L Manual.

There are some complaints regarding the accessories, and they believed that given the price tag, the mouse and keyboard quality could have been improved.

Many of the buyers decided to either upgrade or buy the RTX 2060 version directly since the performance improvement is justified given the price difference.

People from all around the globe have bought the OMEN 25L, and from their reactions, it can be said that anyone who buys it wouldn’t be disappointed.

OMEN’s 30L and 25L gaming PCs raise your skill ceiling one click at a time  PCGamesN...