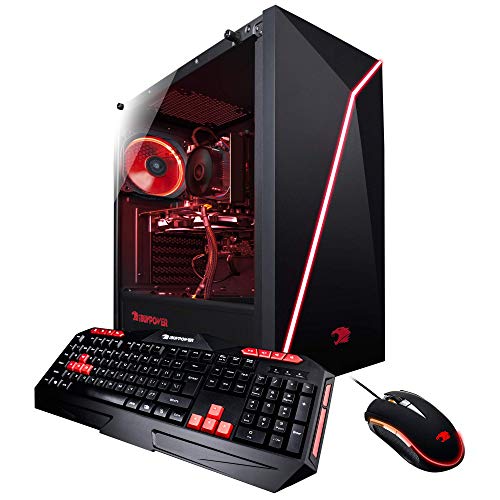 Read iBUYPOWER Enthusiast AM010A gaming PC review and see the price. The current computer hardware prices have made most buyers frown, and the budget buyers or entry-level gamers find themselves in even more trouble.

Getting a decent PC without having to spend too much is a grave concern, but the situation isn’t entirely hopeless.

Well, thanks to brands like iBUYPOWER, the users can opt for a desktop that favors both their budget and performance requirements, the latter to at least some extent.

So here is the review of the iBUYPOWER Enthusiast AM010A, an entry-level gaming machine that you can choose.

It has got a large enough chassis (too large, some might say), a 6-core AMD processor, a low-end dedicated GPU, a decent amount of RAM, and a hard drive for storage.

And while the overall connectivity is far from the latest, you do get all the needed ports and slots. Now, if a USB Type-C port was in your wishlist, you might be up for disappointment I’m afraid.

We have talked about all the relevant things about the desktop in this review which could exactly be what you needed before making a decision.

While we cannot call it a good enough choice as an entry-level gaming desktop in 2021, the iBuyPower Enthusiast AM010A can still be a decent option for those looking for a prebuilt, instead of building a desktop on their own on a very tight budget.

The design of any gaming PC is usually the first thing that people notice, and the case being used has some added advantages as well.

Now the desktop here is not very distinguishable from other towers, lighting on the inside, a glass panel on one side, and things like that.

The chassis used in this is not exaggerated, and you would notice the same one in a few other custom desktops from the brand.

The front panel has a basic design, with the power button at the top, alongside a few ports.

The glass panel at the side shouldn’t be much difficult to take off, and there’s subtle lighting inside, and on the cooling fan too.

While the build quality of the case is good, it could have been a smaller one in size.

The extra space inside does give you ample options for upgrades, but given the spec sheet, any radical upgrade does not make sense.

Also, the dimensions are no longer compact, which is more of a problem than an advantage, at least in this scenario.

Now inside the chassis and on the motherboard, you get an AMD FX 6300 processor, one of the very early gaming processors.

It has got 6 cores and doesn’t support hyperthreading.

The base frequency of the processor is 3.5 GHz, and it doesn’t get much higher with turbo boosting either.

Given the frequencies of some of the latest launches, this doesn’t feel enough.

And when considering single-core performance, well it does not impress at all in reality.

However, the multi-core performance on the processor is decent, well at least close to that if you consider the needs of users when it was first launched.

There is also 8 GB DDR3 RAM in this, along with a dedicated NVIDIA GeForce GT 710 GPU and a 1 TB HDD.

So these are of the older kind too, except the Windows 10 OS which is installed already.

You might be wondering who’s this PC good for then? There are some other uses, but the most prominent of them is casual gaming.

Although, keep in mind that the frame rates are going to be close to 60 fps and that too on the low to mid settings, depending on the game.

The reason for this is that the 1 GB VRAM present in the GT 710 has its limitations.

Other non-intensive things that rely on more cores, rather than single-core performance or general usage that requires better graphics than the integrated kind, also fall under the category.

One good thing about the processor is that, even though very cheap, it is one of the very rare ones of its kind that can be overclocked.

However, if you do plan on tampering with internal voltages, make sure you install a far better cooling system than the desktop already has.

You get Windows 10 Home preinstalled in the Enthusiast AM010A, which should suffice for most kinds of usage.

The desktop has got a hard drive solely for storage when you take it out of the box. It is a 1 TB drive, although you do get to add more storage.

Slots for both SSDs and hard drives are present in this regard.

The RAM, as we said, is of the DDR3 kind, and the 8 GB of it can be expanded as there are slots for that as well.

So with some upgrades, the desktop can become a lot more responsive and convenient for you to work on.

The ports on the Enthusiast AM010A include two USB ones at the front and several others at the back.

Now, most of these are the USB 3.0 kind, although there isn’t a USB Type-C port. Given the price tag and overall specs, one can’t complain either.

Other than that, there are a few video ports as well through which you may add more monitors.

There isn’t an integrated GPU on this, and so all the graphics are handled by the GT 710.

Moreover, there’s also Bluetooth and WIFI ac that comes in the desktop, so you no longer have to add external adapters for wireless connectivity.

On top of everything mentioned above, the Enthusiast AM010A also comes with a wired keyboard and a mouse.

These are of average quality and are not to be thought of as good as dedicated gaming peripherals.

Also, there’s a 1-year warranty on this, and the brand is to resolve any hardware issues that may arrive during this time.

What Do Users Think About iBUYPOWER Enthusiast AM010A?

While the user base of the iBUYPOWER Enthusiast is not as dense as it once was, people are still considering it as a decent desktop.

This is because of its extremely budget-oriented pricing and use of standard hardware.

The case design has been often mentioned as too large, but some have seen this as an opportunity for further expansions or upgrades.

There are mixed feelings about this among the users, to be honest.

About performance, well those who had casual or light gaming to do were mostly satisfied.

The desktop could provide almost 60 fps on certain light or older titles, while ones like Fortnite could not see more than 40-50 fps. This is on either low or mid settings though.

They did like the fact that the desktop could be upgraded, and many have done so as well.

The GPU upgrade often needed the addition of a better PSU as well, which you must know.

There was no trouble in replacing any of the internal components, and the processor could be overclocked, which are more reasons why they were pleased.

Now some did have a few hardware issues, but these were nothing serious.

For example, some had issues with the built-in WIFI adapter and had to resort to using the Ethernet port and a wired Internet connection.

The quality of the peripherals that came with the desktop wasn’t very appreciated either. The users believed that they could have been better.

Other than the fact that the desktop uses older hardware and the related issues surrounding it, there weren’t any major complaints.