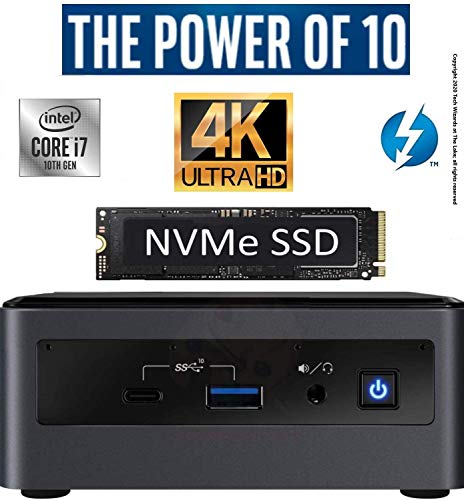 Read Intel NUC 10i7FNH1 mini PC review and see the price. The Intel Next Unit of Computing or NUC is one of the most interesting mini-PCs, and as it comes from one of the most popular chip manufacturers, its reliability doesn’t need to be questioned.

The first generation NUCs were launched in 2013, and since then several improvements and iterations later, we now have those like the Ghost Canyon and Frost Canyon. The newer NUC 11 has been launched very recently as well.

These can be used for a lot of different tasks, including gaming and productivity. So today we will be reviewing the Intel NUC 10i7FNH1, a 10th gen Core i7 mini PC, and you can see for yourself how good it is.

There are Core i5, and Core i3 versions as well, which come with different combinations of RAM and storage. This one, however, is one of the best with 64 GB of RAM, and 500 GB of SSD storage.

And good specs are not the only thing that you’d find in the NUC, as there is great connectivity too. Be it the latest Bluetooth or WIFI, or Thunderbolt ports, you’d never know from a distance how utilitarian this pint-sized desktop can be.

But among all the good stuff, there are also certain noticeable drawbacks, but even then, it can compete against some of the best Mini desktops out there, including the Mac Minis.

Read more and make sure you leave feedback if you liked the Intel NUC 10i7FNH1.

Beware of: Not as industrious as a tower desktop in the same price segment

Best uses for: Business use, one of the best Mini PCs with 64 GB RAM, photo editing and other purposes.

The Intel NUC 10i7FNH1 comes with wonderful performance and connectivity, in an extremely compact package but at a premium price. We would have liked it even more if better graphics-related provisions were available on this.

If you are a fan of the NUCs, then you should also know that they haven’t gone through a lot of changes, design-wise.

The NUC 10 looks like some of its previous versions, but certain changes have taken place, especially regarding the features.

Other than the newer gen, quicker processors, the device now also comes with better cooling, more ports, etc. Like the NUC 8, you notice a similar color scheme on the NUC 10, and the dimensions are roughly the same as well.

There is an even slimmer version, but unlike this one, it won’t be able to hold a 2.5-inch SATA drive as it is only 1.5 inches high.

So, depending on what you require, the choice is yours.

You notice things like a LED power button, a variety of ports distributed between the front and back, a well-built metal chassis, and things like this on the NUC 10.

And getting to the 4 x 4-inch motherboard, or other components is easy too.

All you need is the right screwdriver, and as soon as you remove the 4 screws at the bottom, everything is laid out in front of you.

Even though small, the chassis has enough ventilation so intensive usage shouldn’t be an issue, as long as you aren’t bothered by the cooling fan.

And while these aren’t very drastic ones, the performance improvement was noticeable.

Now surely, the Ice Lake CPUs using a 10nm manufacturing process are better optimized, but that is a discussion for some other day.

Now, most Core i7 CPUs of this generation have 8 cores, but this one being a power-saving chip has a lower TDP and core count.

Also, it is soldered to the motherboard, so you cannot upgrade it.

It brings the Intel Integrated UHD Graphics with it, but that isn’t a very potent kind of graphics.

Sure you can do all the basic stuff without sluggishness and run multiple monitors as well, but not much beyond that.

The NUC 10 doesn’t allow you to install a GPU in it either.

That doesn’t mean you’re dead in the water though, as the Thunderbolt port at the back can be used to add an external GPU.

However, these are expensive, and big, which kind of defeats the purpose of getting a Mini PC.

But since not everyone requires a dedicated GPU all the time, it’s a good thing that the NUC 10 allows the scope of adding one.

In real-time usage, the NUC 10 works as good, and even better than a laptop with similar specs.

This means day-to-day, simple productivity tasks and all that can be done even without an external GPU.

But if you add one of these, then you can use the desktop for things like video editing, some light gaming, and such applications.

Nothing too intensive though, as the PC is not meant for that, and the fans can get noisy. And after a point, some thermal throttling is also imminent.

Now the NUC comes with two options. Either you can get a ready-to-use unit like this one, or get a barebones kit.

In the latter case, you’d have to install individual units like the RAM, storage, etc, which means more customization, and a lesser price.

And while this unit already has the Windows 10 Pro installed, you’d have to do that manually on the barebones kit.

This NUC 10 comes with a quick M.2 SSD installed, with excellent read and write speeds.

If the 500 GB of storage space ever feels insufficient, or for some other reason you need a 2.5 inch SATA drive, you can add that as well.

And the RAM is maxed out on this, with 64 GB installed, in two SODIMM modules.

Accessing these is easy as well, just like any other component inside it.

I bet you’ve only seen a handful of Mini PCs that can handle more than two monitors, if at all.

Well good news, as the NUC 10 can run up to 3 4K displays at the same time, without a noticeable drop in performance.

That is possible through the HDMI port and the Thunderbolt port, both present at the back.

Other than that, you’d also notice an Ethernet slot, two USB 3.1 ports, a Kensington Lock slot and, the power jack.

At the front, there are two more USB ports (one of these is a USB Type-C port) and a headphone jack as well.

And these newer NUCs also come with WIFI 6 and Bluetooth 5, an important development over the previous generations.

Other than being a very compact desktop, the NUC 10 also comes with a VESA mount.

So if you want your desk to be the cleanest possible, attach it to the back of the display and you have an almost All-in-One desktop.

There are two microphones on the front panel, and the device also supports 7.1 surround audio.

This particular unit has bloatware-free Windows installed, thanks to the seller. And other than that, Intel offers a 3-year warranty on the NUC 10.

What Do Users Think About Intel NUC 10i7FNH1?

Very few Mini PCs have been able to impress buyers across the globe as Intel’s NUCs have, and the 10th generation ones have also done a great job.

From minimalist design to having convenient features, the buyers are very impressed.

The main thing that has been largely praised is the performance, and the users were amazed at how good this small desktop was.

It could handle all the basic things like web browsing and such, while some have also used it for more intensive things like processing audio and video.

Also, some have used an external GPU as it supports that as well, and as a result, have found that it performs better than a similarly configured laptop. It certainly is as upgradable as one, if not more, and yet takes a lot less space.

And along with it, comes Thunderbolt support and the latest Connectivity features, which were very beneficial for the buyers. Check out Intel NUC 10i7FNH1 Manual.

They were able to use multiple monitors at the same time, and with a USB hub, adding tons of other USB-based devices wasn’t an issue either.

The NUC, although comes in several variants, is expensive, which is one of the things that were problematic for the buyers. Some have preferred the barebone kit due to a tight budget.

Also, while the eGPU support improves functionality to a greater extent, the buyers wished the NUC 10 supported a video card like some of the other NUCs do.

Even though there are a few such drawbacks, the NUC 10 has a lot of great features, which were very much appreciated by the users.

The experts at Digital Trends think that the NUC 10, like other NUCs from Intel, is a fresh variation of a desktop. They love its simple, compact, and power-efficient nature, but the noise it makes under workload is one of the things that they didn’t like. Among other Windows-based mini PCs, this is an excellent option.

As per Choice, the NUC 10 packs a satisfying performance in a very little frame, and has a lot of useful ports as well. It can be a great alternative to an All-in-one desktop, but you might have to adjust to the noise it may make under heavy usage.

Those at Anand Tech have opined that although the NUC 10 is a decent mini PC with all its features, it also has a lot of competition now. Therefore to be at the top, Intel has to focus more on providing better value at any given price tag when these devices are concerned.