With laptops and tablets enjoying lion’s share of attention and admiration, it is not easy for the desktops to catch the buyers’ eyes.

But if it comes to Lenovo Ideacentre series, the story is lot different. The desktop looks truly smart. It features a ‘neat and clean’ design.

With some of the best performing components tossed inside the box, the desktop offer good performance at a very reasonable price.

In fact, compared to the price tag, the system offers more than what you can expect. Check out best desktop computers list. 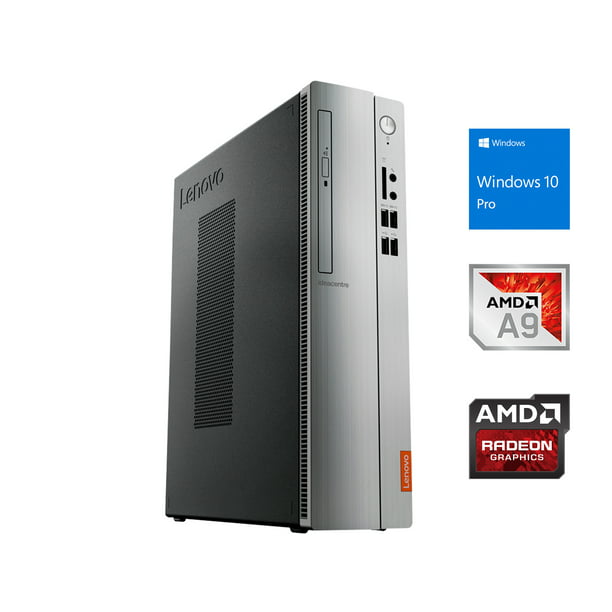 Lenovo Ideacentre 310s comes with some decent elements in the major compartments under the lid.

The desktop is built up around AMD Radeon R5. Lenovo has opted for dual-core processing in making of this model.

If it comes to design, Lenovo Ideacentre 310s is a real beauty with its own rustic charm. The model scores more than average on performance scale.

It offers great performance for simple computing work, internet surfing and web browsing. The machine is not meant for multimedia works or high-end gaming. Lenovo deserves a five-star rating for its Ideacentre series. The brand has spent much of time and effort on improvisation to make Ideacentre 310s desktop an affordable system for satisfactory performance.

It is a decent piece to do your daily computing, perform simple multimedia activities, use demanding apps, play low-end games and enjoy entertainment.

In a word, the desktop is a good pick to satisfy a variety of needs. Check out the list of small business desktop computers. AMD Radeon R5s is the lifeline of Lenovo Ideacentre. The model features dual-core processing, with a dedicated graphics processor installed to deal with the graphic demands and needs.

AMD Radeon R5 is a powerful processor that lends high speed, versatility and multitasking ability to the system.

Throw any kind of simple tasks at it and the system will respond with quick outputs.

Keeping multiple tabs open does not obstruct its fine and flawless performance.

You can do YouTube streaming while doing other works and the system won’t burp even for a single second.

The system takes a few minutes to start, due to integration of 4GB DDR4 SDRAM (2400MHz).

That is a big drawback but it is a big relief that the system allows you to add more RAM as per your needs.

RAM upgradability is a big plus for the users as it is often required to handle memory-hungry multimedia works and professional apps. The Ideacentre 310s from Lenovo features a simple design. However, simplicity is a camouflage for discreet sophistication.

Most of the slots are anchored on the side, allowing the users to plug in external devices without undergoing hassles.

Despite being slim and trim, the device has got a masculine body. In other words, it is enough strong to sustain careless use day in and day out.

With minimum care, it will continue serving your purposes for many years to come. Check out the list of best desktop brands.

The big disappointment in this segment is absence of an internal fan. A tiny fan is housed on top of the processor but that does not make things any better.

The inside ambience is hot and that does not sound great! There is a strong possibility that the system will go slow and even come to a crash.

It’s bit surprising that Lenovo did not think about adding a powerful fan as it could have saved many from visiting call centres with a complaint of malfunctioning computer.

Lenovo Ideacentre 310s houses a dedicated AMD A9 APU co-processor. It has been intelligently integrated into the design to deal with the graphics loads alongside the main processor.

The result came up more amazing than the wildest imagination. The images appear crystal clear with accurate detailing.

No colour distortion will be experienced. In a nutshell, you will experience invigorating display. The Lenovo desktop does not come with any graphics card. However, the integrated graphics co-processor does magic in handling graphic demands and producing excellent display.

The users always love watching crispy images whether they do multimedia tasks or play games.

Good news is even without a graphics card, the Lenovo desktop produces incredibly amazing pictures. Lenovo Ideacentre 310s offers a large amount of storage space. It houses a 1TB hard drive that spins at the rate of 7200rpm.

Therefore, you will be able to store a large number of memory-hungry text and image files, YouTube videos, songs and movies and retrieve any of these in seconds.

With plenty of storage space, it is most unlikely that you will run out of space in a couple of years even if you need to save a plethora of files on a daily basis. Others: The Lenovo Ideacentre desktop features a DVD/CD burner and a built-in media reader. Lenovo did not target the multimedia professional or gamers while launching this Ideacentre desktop. There is hardly any grudge against its build and design. The design looks solid and the same is true for its durability.

The machine is speedy but not lightning-fast like a high-end system. AMD Radeon R5 does a good job but gets no solid support from only 4GB of RAM.

The amount of RAM thrown into the box is not standard these days and causes the machine to take a few minutes for booting. Good news is RAM upgradability is allowed if you want to perform other tasks.

According to our survey of Lenovo Ideacentre 310s Desktop users, it is being seen that the kind of digital output it is offering is simply giving you a better advantage.

That means you can simply rely on it. In fact, it is no doubt offering the best concept of it. You can definitely get the best working line up on it. Check out Lenovo Ideacentre 310s Manual.

It is having a wonderful memory but otherwise it is having an issue with the speed. In fact, the price and value of it is definitely giving you enough reason to buy.

But if you talk about the wifi and the connection issues then it can be a big problem. There are other versions, which are definitely giving you the best output with regular on going works.

It is a very good deal according to that. If not supporting, Windows 7 can be a problem then it is a issue. In fact, it is true that you are supplied with windows 10 which is definitely a great aspect.

The price of this system is no doubt giving you a better aspect. It is perfect for the small business owners. You can also use it for your home and school projects. It will be a great idea. Affordability is the main aspect.

The system is not quickly responsive. However, it provides plenty of storage space for saving text files, songs, videos and apps. Display quality is quite good but I would prefer resisting myself from using the word “extraordinary”. According to Which.co.uk it is being said that it is a good everyday PC. It can easily handle the official works, social media work with the other regular works.

Thus, it is very easy and effective for using. Now it is true that whether you will invest on it or not. You can think about the entire costing and the features and depending on the purpose, you can gain the best. The users should clean off the bloatware as early as possible. The system runs on Windows 10 that has “Fresh Start” built into the software.

It reinstalls the operating system without any intervention of the 3rd party apps from any company. It dramatically improves the system’s speed. Cleaning bloatware will not take more than 5-10 minutes.

The Lenovo ideacentre desktop houses only 4GB of RAM. Undoubtedly, it is not enough for most of the tasks.

It is fine for simple computing but what if you are a multimedia professional or a hardcore gamer? It will not suffice you needs and you have to upgrade the system memory.

4GB RAM does not sound a great feature in 2019. Lenovo should have been more thoughtful in this area.

Another big mistake is Lenovo has not included any internal fan to pull or push the hot air built into the box.

It enhances the chance for the system to go slow or crush if it works for hours. You should add a fan of suitable size and house it at the right place. It will add to life of your computer.

This Lenovo desktop offers plenty of storage space. At least, you don’t need to replace the HDD in immediate future even if you are used to save a lot of text and graphics files, video clips in computer.

The WiFi antenna panel should be moved if you are keen on using the PCI Express slot. In case of issues, you can always get a far better WiFi card.

The price is very reasonable. In fact, the system is good for that much. This Lenovo Ideacentre is not designed to be a lightning-fast system though you can do works other than simple computing and internet surfing.

If you buy it knowing its features and limitations, you are unlikely to grunt. If you want to do anything more on this computer, upgrade RAM as it will make the system quicker.

Bottom Line: For simple works or beginners, it is a good pick for hard-saved money.