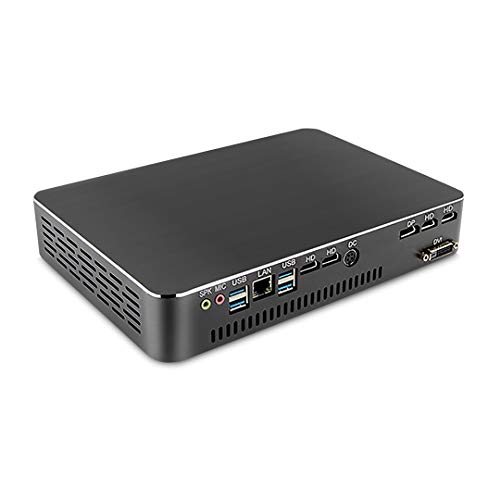 Read MSECORE MV100 mini PC review and see the price. Shenzhen MSECORE Technology is a Hong Kong-based small PC manufacturer and has been providing custom SFF desktops to consumers since 2010.

And while a lot of you may not be familiar with the brand, it does have some great desktops, at least as far as the specs are concerned.

So today you see the MSECORE MV100, a compact desktop, but not as small as a mini PC.

The kind of design that it comes with, has certain advantages like there’s still cooling fans and a dedicated GPU inside this, while still retaining its compact form factor.

The specs in this desktop include a Core i9 processor, a mid-range GTX 1650 GPU, and good amounts of RAM and storage which we would be discussing later on.

What’s more important is its price tag and the number of ways that you can customize one of your own.

For example, it has got different GPU options, processor choices starting from Intel Core i3s, and so on.

These make them appealing to a wider audience, and you can choose the specs that suit you best.

But trouble might arrive at the time when upgrades or replacements do.

The brands of any constituent hardware aren’t mentioned, so it has to be considered that all these are China-based products too.

Now a dedicated brand for Mini PCs that has so many options to provide should still have some integrity.

Moreover, you are also provided with a good warranty period, that further backs up its reliability.

Best uses For: Dual monitors, video editing, game development, one of the best desktops with 64 GB of RAM and other purposes.

With a very compact form factor, options for dedicated graphics, and several options of hardware, the MSECORE MV100 can surely be one of the best desktops with 64 GB of RAM that you can buy today if you’re looking for a small, OEM desktop.

The MSECORE MV100 is an SFF, no doubts about that. But the way it consolidates all of the components inside is the reason why it stands out.

There are very few PCs out there that are so small in size and can still fit a full-sized GPU.

The cabinet is of decent quality, nothing too special, but there are lots of vents for cooling, however.

Now devices from the brand like the MV200 have got a touch of RGB too, which, unfortunately, is not present on this one.

It comes in two color variants, one white, and this one which is black.

The package also includes a desk bracket on which you can place the desktop upright, or sideways without it, whichever is more convenient.

You get 3 ports on the front (or side, depending on how it is placed), and the power button at the front.

All the other ports are at the back, and a few of these are bunched up. Given the space available on the back panel, the orientation could have been different though.

But as it all depends on the motherboard, nothing can be done here.

The processor, although previous gen, has a lot of potential for both single and multi-threaded applications.

The clock rate ranges from 3.0 GHz to 5.0 GHz, so the performance is ample for everyday usage, even if you run heavy software.

But it isn’t overclockable, for which you’d have to have some other option, like the MSECORE MV300 for instance, which also comes with the latest Bluetooth and WIFI specs.

And the PC performs well in graphics-engaging tasks too, because of the GTX 1650 GPU.

And while it isn’t the most preferable video card today for gaming or productivity, the 4 GB VRAM and the general performance that it provides are great for low to mid-range usage.

The desktop can thus be utilized for a lot of things, and designing, video editing, and tasks like that, as long as they aren’t too intensive, can be done as well.

The presence of vents helps a lot in cooling, but it isn’t as effective as the kind that you’d get in a tower desktop.

And as for the OS, MSECORE provides Windows 10 Pro by default in these desktops, so the added security and other professional features are also present in the device.

As far as storage is concerned, the MV100 has all the necessities like a 256 GB SSD, and a 1 TB hard drive.

The SSD is an NGFF, and although it is quite snappy, the read and write speeds are not the same as a PCIe SSD. You may replace it and get a faster SSD if you feel so.

There are two slots present, which is the standard for most desktops, so that is convenient.

Even though small, the MSECORE MV100 provides the user with a lot of ports, and all of these are useful ones.

And while you won’t be getting a Type-C port, there isn’t a shortage of other USB ports.

These are a total of 7 in number, 3 of them on one side of the device, and the rest on the back panel.

Now we didn’t like the way some of these were placed, one on top of the other, but one shouldn’t have a problem connecting wires anyway.

Other ports include 2 HDMI, a DisplayPort, and a DVI port for connecting multiple monitors.

There’s a LAN port as well for wired internet connectivity. There are also audio ports for speakers/headphones or mic.

Also, there’s Bluetooth and WIFI available as well, should you opt for them at the time of purchase.

The MV100, like other desktops from MSECORE, comes with a standard 2-year warranty.

In the box, there is a desk bracket provided, among other basic things like the power cable, WIFI antennas, and such.

What Do Users Think about the MSECORE MV100 Mini PC?

The MSECORE MV100 has been able to provide a lot of users something that they specifically wanted, an SFF desktop with a dedicated GPU at an affordable price tag.

And since there are several variants present, one shouldn’t have any problem finding one that suits their needs the best.

As for the design, it is one of the most important features of the desktop that makes things very interesting.

Now surely there are SFFs from other brands, but only a few of them can offer dedicated GPUs. Also, accessing the internal components wasn’t found very difficult, which is also a great thing.

We noticed almost no complaints about performance either since the specs were decent, and given the kind of work that it is meant to do, it does them all well.

There was no shortage of memory, and the fact that it supports up to 64 GB of RAM, makes it an even better device in its segment.

Now it is true that connectivity in the MV100 isn’t ideal, both when compared to its competitors and other devices from MSECORE itself.

But since it has all the necessities, the users had no issues when connecting the kind of accessories that they needed to.

A few concerns, however, remained about the quality of the hardware that has been used.

There is a 2-year warranty, and as there have been no such reports or major components turning out to be faulty, the buyers don’t have to get too worked up about this.