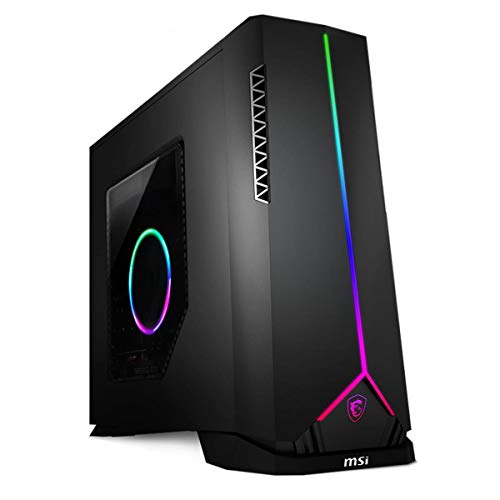 Get it from Amazon

Read MSI Aegis SE 10CQ gaming desktop review and see the price. If we follow the products of MSI, we can easily notice that most of its devices are highly configured and are available at a very high price.

But for the casual and low-budget users, the company has made only a few systems. These have comparatively lower specifications and they are quite affordable. The performance of these desktops is not as strong as the other highly configured desktops of MSI.

But the performance of such a desktop is sufficient for any casual to moderate work or game. This MSI Aegis SE 10CQ Gaming Desktop is an example of such a PC.

By using this product the users can perform any regular task. But it is recommended not to try to run any classified software in it.

Even on this PC, the users can run most of the games that are trending now, but they have to set the settings as low as possible.

This is a moderately configured pre-build desktop, specially made to perform easy to moderate tasks. The performance of this PC is quite stable until you run any high-end task in it.

Buy for: For casual usages, this PC is one of the best affordable options from MSI. Although this PC is a gaming PC, it is not so bulky.

Beware of: This PC is not made for ruthless gaming. The storage capacity of it is not sufficient for users of this generation.

Best uses for: Multiple gaming, CS GO and other purposes.

To make the device affordable the company doesn’t attach a very high configuration in this product. This device is very suitable for those who search for an affordable option for daily moderate usages. According to its configuration, this computer offers very stable performance. Upgradability makes the desktop more suitable for the users of this generation.

A modern and unique design is very obvious in any gaming desktop of this generation. Transparent glass panels, RGB lights are very common in most gaming desktops.

The MSI Aegis SE 10CQ is available in black color and there is a transparent glass panel on one of the side panels of it.

That side panel is not entirely transparent. The transparent glass occupies the middle portion of that panel.

There is a vertical LED line light at the middle of the front panel and just before the company’s logo; the line gets divided into two sections.

The entire product is on mat finishing and the manufacturer tries to give the chassis an angular tint.

For this reason, the side edges of the front panel get cut. Some silver-colored angular cutouts are also present at the side upper portion; it also helps in air ventilation.

There are no USB ports on the front panel; these are shifted to the upper panel. Two USB ports and some audio ports are placed there.

Through the transparent panel, one can easily locate the RGB ring lights. All the RGB lighting can be controlled through a button, not by any software.

Although this device comes under the gaming segment of MSI, still it is not bulky; rather it has a very slick design.

Not a lot of wires are visible from outside.

In a gaming PC, performance and speed are the two major concerns. A computer’s performance is mainly dependent upon the components that are used in it.

This product of MSI is not very highly configured. But its specification is enough for performing any easy to moderate tasks.

The maximum speed on which this 6 core processor can work, is 4.3 GHz. 12 MB cache memory is present in it.

For multitasking usages, this processor is one of the good options. Even for playing any easy to the moderate game like CS Go, the speed of the processor is quite perfect.

The users can enjoy smooth game play up to 1080 pixels. This PC is not made for 4K gaming.

To tackle the graphical contents it has AMD Radeon RX 5600 XT. This is a 6 GB GDDR6 GPU. The performance of this GPU is perfect for casual gaming.

But, it is not recommended by the experts for ruthless gaming. This GPU lacks the ray-tracing facility.

You will get a satisfying performance from this desktop while running any moderate task. The users will get decent fps from the GPU’s end.

The overall performance of this desktop, according to its specifications, is quite good.

But, it is not the best option for playing high-end games; because of insufficient airflow and lack of liquid cooling.

Heating issues and noise always create a bad impression on any device’s performance. Unfortunately, both are present in this product.

To avail the computer at an affordable price, the company has made compromises on such issues.

Windows 10 Home is the operating system on which this gaming PC runs.

In order to get the maximum outcome from this PC, it is requested to always use an updated OS in it.

The responsiveness of any desktop is mainly dependent upon the RAM capacity and the storage type that is present in it. 16 GB RAM is present in this system of MSI.

There are only 2 RAM slots and the company has placed two 8 GB RAM in both. The maximum RAM capacity that can be used in this computer is 64 GB.

The initial RAM capacity is enough to run most of the moderate games of this generation. We can perform multitasking jobs more smoothly when we use faster RAMs.

The RAMs that are present in this PC, run at 3000 MHz. This speed is enough for any casual user. If any user needs more RAM speed, then he has to upgrade the RAM section with better hardware.

He can choose the capacity and speed of the RAM, according to the requirements of his project.

The booting time and the data transferring speed of a desktop mainly depend upon the type of hard disk that is used in that particular device.

In this era, it is impossible to imagine a gaming PC, without an SSD. SSDs are costlier than HDDs.

But the longevity and working speed of this type of hard disk are almost 2 to 3 times more than the traditional ones. MSI has attached a 2.5″ SATA SSD of 512 GB in this gaming computer.

The capacity of this drive may seem to be insufficient for many users. But the upgradability facility is present in this product.

So, they can simply upgrade this section, according to their requirements. This problem can easily be solved by an external drive, too.

The users, who perform multitasking jobs regularly, always pay special attention to these two sections. An insufficient number of USB ports can be a huge problem for them.

This problem is very common in most compact devices. This PC of MSI has a total of 6 USB ports. 2 USB 3.1 Gen 1 Type-A ports are present at the upper panel of the chassis.

At the rear side, there is a full set of 7.1 HD audio ports. One microphone and one headphone port are also present at the upper panel of the chassis.

For LAN connectivity, the users can use the one RJ45 (1GbE) RTL8111H port. In this generation, wireless connectivity is very necessary in any PC.

This product of MSI is compatible with Wi-Fi 6. Intel dual-band 802.11ax is used in this computer.

The range of this wireless connectivity is quite good and can establish very stable connectivity with various devices and peripherals.

MSI MicroATX MB motherboard and B460 chipset are used in this gaming PC. The manufacturer has attached the air RGB coolers to this desktop.

The PSU that is used here is 350 W. MSI has placed some averagely performing elements in these sections.

If they attach better components here, the productivity and overall performance of the desktop can be easily enhanced.

Eventually, the price of the device will be enhanced too. Mainly, for this reason, the developers attach such average-performing components here.

If any user needs to enhance the PC’s productivity, then he needs to upgrade these sections.

This product comes with a conditional warranty of 1 year. The users will get a gaming keyboard and a gaming mouse with this particular package.

What Do Users Think About MSI Aegis SE 10CQ ?

The users, who were in search of a decent performing gaming prebuilt desktop, are satisfied with its performance.

Moderate and casual gamers are also happy by getting this desktop at this price range. But the professional gamers and the other high-end users are not happy with its performance.

Most of them complained about the GPU and the cooling section of it. Some of them also stated that they are facing some serious issues while connecting multiple displays with this product.

They also face problems while they try to stream any of their game play on an online platform.

As this product is an affordable desktop, its configurations are not so high. Check out MSI Aegis SE 10CQ Manual.

The high-end users should search for an alternative and the ones who face some minor problems can try to resolve them by upgrading the computer’s configurations.