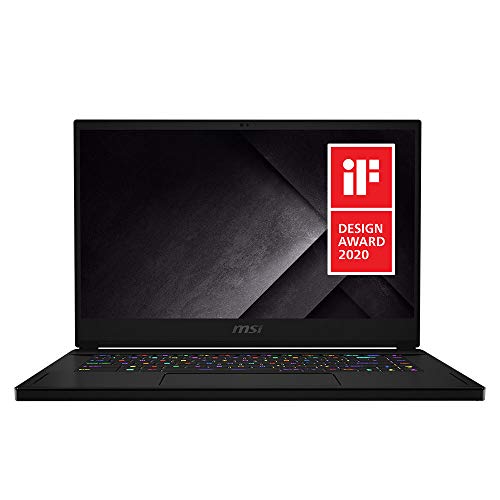 Read MSI GS66 Stealth 10SE laptop review and see the price. The laptops from the brand MSI have made a name for themselves in both budget and high-performance laptop markets, and the GS66 Stealth 10 SE is also one of those devices where this has been maintained.

Now surely it has its weaknesses, but this doesn’t undermine the fact that the laptop is a great choice, and very few competitors can provide the set of features it comes with.

In an overview, this variant has got great specs, like a 10th gen Core i7 CPU and RTX series mobile GPU, and so on. There are other siblings of it too, with even better specs and higher price tags.

The hardware used is mostly from MSI’s arsenal, meaning that these are already much dependable.

Other features, as you will see, like the Thunderbolt ports, WIFI 6 connectivity and the excellent display are other reasons why you should be investing in it.

So join us as we look at the various features of this laptop closely, and find out if this is the one for you.

The MSI GS66 Stealth 10SE is a solid gaming laptop that offers a lot of exciting features for those who need them. The 240 Hz display is surely alluring, but it depends if you seriously need that sort of sharpness. A few improvements in other aspects could have better helped it against the competitors.

The first look at the laptop gives a low-profile sort of vibe that isn’t usually what most other gaming laptops provide with their outstanding design and RGB flair.

However, while it has been kept rather simple, the quality of the chassis is still great. Check out Best Laptops for Web Development.

This nature of the Stealth is exactly what its name suggests, but do not be deceived about its performance, which we would be coming to very soon.

The entire black metallic finish gives it a classic look and also improves its sturdiness.

It isn’t too heavy either, at 2.2 Kgs for this variant, which is good considering the parts inside it. Now there are lighter alternatives as well, no doubt about that.

Also, it is averagely in dimensions, even with so many cooling pipes and equipment inside it.

Very few options would provide you with a thickness lower than this. Not only that, it still offers you upgrades regarding the RAM and storage, which would be useful in the future.

On the top of the lid you’d see an MSI logo, and opening the lid greets one with an RGB keyboard, and a 15.6” narrow bezel display.

The keyboard lighting can be controlled, and you may turn it off entirely too.

The MSI GS66 Stealth 10SE starts from Core i7 CPUs, and goes up to Core i9 ones, so the performance level is robust.

It is one of Intel’s Comet Lake family, and hence has a high clock rate of 5.0 GHz maximum.

These numbers are all well and good until you come to the TDP, which at 45W causes some serious troubles.

But before we come to that, you must know that it is a very capable CPU and has been coupled with an RTX 2060 Max-Q GPU.

This is a 6 GB video card designed for mobile devices, like this laptop itself, for saving power by lowering down frequency.

While the GPU performance is not as good as the Desktop versions of the RTX 2060 for obvious reasons, the laptop is still a decent performer.

For intensive tasks, gaming video editing, and such, you would not notice any frame drops.

There is enough system memory as well which gives the CPU enough power to execute instructions quickly.

In other usages too, like for web development or game creation and any other task that relies on the CPU or GPU, and both of them together, are going to be ever smooth.

There is a slight thermal throttling that takes place, so a heavy workload for a longer duration is not what the laptop can handle with a consistent smoothness.

In most of the popular games, the laptops maintain the 60 fps mark even on the highest settings.

Now things that depend on the display frequency can be enjoyed even better because of the 240 Hz refresh rate.

It is truly a mesmerizing experience to use this quality of the display with the hardware present to back it up.

It is an FHD panel, and even though you may play games on a higher resolution than 1080p, a separate monitor would be necessary.

As for the display here, it has got excellent color accuracy and a good brightness which results in lively visuals.

The peak brightness is not that high though, and it does not have G-sync either, which could be disappointing for some of you.

It comes with Windows 10 Pro as the primary OS installed.

The variant we are reviewing comes with a 512 GB SSD, and another PCIe slot for adding more storage.

Some other laptops do provide more storage initially, but not the additional storage slot.

As for RAM, 16 GB of it is present in a dual-channel arrangement, with both the slots filled.

You can however increase it up to 64 GB when needed.

The ports on this device include three USB 3.2 ports, two USB Type-C ports, an HDMI output port, and a headphone jack.

One of the USB Type-C ports is Thunderbolt 3 capable, meaning that you get increased bandwidth for file transfers, adding another display, and so on.

There is a dedicated Ethernet port, and other connectivity includes Bluetooth 5.0 and WIFI 6, so MSI has got you covered in every way.

The battery life on the MSI GS66 is decent, but it is not as good as you’d think, especially when considering that it has got a whopping 99.9 Wh battery.

That is the most they allow in flights presently, so the size of the battery has no complaints whatsoever.

What causes trouble even with such a battery is the processor, and even though the GS66 outruns competition in terms of battery capacity, the same cannot be said about the battery backup.

The processor draws up excessive power even on the lighter tasks, which surely increases when you put on workload.

This variant of the laptop thus gives about a modest 6-7 hour of battery backup when you watch movies or do lightweight stuff like web browsing.

That reduces to 2-3 hours when gaming or editing, not very different from most other similarly configured laptops.

The edge that it should have due to the hefty battery is mostly neutralized, but the backup time is still better in certain use cases.

The RGB keyboard on the laptop has got 1.5mm key travel along with responsive feedback.

This makes it more appealing than the average gaming laptop keys.

The same goes for the touchpad, though you might still prefer dedicated gaming peripherals.

There are 3 cooling fans in it, and 7 pipes for heat reduction, and yet, some more efficiency was expected.

The laptop may not get insanely heated up under workload, but the heating is noticeable.

There is a webcam on top of the screen which comes with an IR sensor for added security, and there are microphones present as well.

There are two 2W front-facing speakers, and although loud enough, they aren’t the clearest or capable of delivering heavy bass.

A standard warranty period has been assured by the parent brand.

What Do Users Think about MSI GS66 Stealth 10SE?

The MSI GS66 Stealth 10SE has lots of features, but it was able to attract a selective portion of the audience.

Not that it is lacking in any front, it is simply that only a specific part of the crowd needed the advantages it provides.

For example, the 240 Hz display made it very clear that both professional and non-professional gamers would find it useful.

There are very few advantages of going over 144 Hz, but those who want an extreme experience could enjoy it.

Casual gamers, on the other hand, had no use of such high refresh rates. Check out GS66 Stealth 10SE Manual.

The same goes for battery life, which was liked by those who did not need excellent battery runtime.

However, there are others in the price segment that come with more efficient processors.

Meaning that those are far more suited for gaming tournaments as well as college classes.

The overall aspects of the device were mostly liked by the users, the good processor, graphics and RAM made sure that heavy workload could be handled without inconvenience.

However, those who had to do web development work with such heavy tasks for an increased amount of time complained of thermal throttling, and even with a large battery, the backup was not very exciting.

So the laptop, although with a few flaws proved to be a sturdy, feature-packed device.

The option of making upgrades was beneficial to all, and very few gaming laptops offer extra PCIe storage slots.

The higher variants being quite expensive, those who chose this were within the low to mid variants, since better options were available in the higher price segments.

The experts at TechRadar think that the MSI with its quality hardware, excellent display, and impressive connectivity makes a great gaming laptop. It does have weaknesses, but those do not outweigh its strengths and the advantages it offers to users.

As per LaptopMedia, the GS66 has many improvements over the previous GS65 model, and there are many good things about it. However, the absence of a card reader and the typical heating issues that the Stealth series has had, bothers them.

It is the view of those at Notebookcheck that with the hardware present inside, the MSI GE66 can take on intense games even on higher settings. The screen is good but had areas for improvements, and the same is for a few other aspects of the laptop.