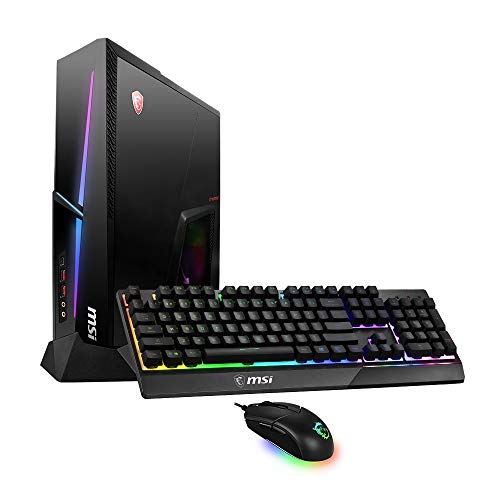 Read MSI MEG Trident X 10SD desktop review and see the price. A good desktop is not just about performance as certain other things matter too, especially when you are paying a lot of money.

Well, it seems like there is finally a good option for the buyers, as this desktop from MSI takes care of most of the important aspects.

With variants having mid to high-end specs, this is a performance-oriented desktop, no doubt about that.

Also, the Trident X comes in a slim form factor, and though not unusual, MSI has done well to put so many high-performance components in such limited space.

The one we have here comes with a Core i7 processor, paired with a top-end RTX video card, a lot of RAM, SSD storage, and on top of all these, excellent connectivity too.

You’d think that such mouth-watering specs would cost a fortune, and while slightly on the expensive side of the scale, these rigs are not over-priced.

Also, the warranty and quality hardware that you’d be getting makes it worth it over building a system yourself, in which you’d still have to put in the extra effort and time.

There are certain things that we haven’t liked about the desktop as well, and to know everything that we think about it, you must read this review.

Beware of: Can be expensive

Best Uses for: Multiple gaming | Network Engineering and other purposes

The MSI MEG Trident X 10SD is a brilliant machine, not just among MSI’s products, but the entire pre-built competition. Its small size and powerful specs do make a point, but the compact form factor can have certain adverse effects too.

The design of the rig is not entirely new, and MSI has used this kind of a case in other of its “Trident X” devices.

It is compact, with different portions allotted to the PSU, CPU, and GPU so that neither has a deficit of cooling.

This not only keeps your desktop cool but also gives it an iconic look, unlike other gaming desktops.

There is RGB lighting present on the case as well, but just the right amount. Check out best laptop brands.

The tower itself is sleek and just 5 inches wide, with an optional glass panel on one side to show what’s inside.

While most gaming PCs have cooling fans on either side or at the top, the Trident X 10SD has those on the lower side, below the components.

And we must say that the entire design keeps temperatures within working limits, and there is no thermal throttling or fan noise whatsoever.

Now despite the small form factor, the desktop can still be upgraded, with the PSU being the exception.

There are free storage slots, and most other components can be swapped with newer ones with a few tools and some effort on your end.

The good thing is that you get ports both on the front and back, so connecting peripherals or other devices is never an issue.

We would be coming to that later though.

The specs of the desktop include a Core i7-10700KF processor, one with 8 cores, 16 threads, and in this case fully overclockable.

The clock rate before overclocking ranges from 3.8-5.10 GHz.

While there are better CPUs, especially those from Ryzen, it is yet a good performer if you look at the various benchmark results of the desktop.

The GPU used is an NVIDIA RTX 2070 Super, an 8 GB video card much appreciated for its performance without getting extremely expensive.

So, feel free to get that high-res monitor, since the GPU can easily power your games on it on the high settings.

And not just games, the desktop can also be used for intense video editing, rendering, and tasks like that without worrying about frame drops.

One special purpose for which we find the desktop very suitable is network engineering.

Those engaged in this and the related professions can work on heavy projects with various server-grade and network monitoring software like GNS3, PRTG, and so on using this desktop.

The GPU can be upgraded too, as long as the one you choose fits in the case, and is sustained by the 650W PSU, that cannot be replaced.

This is the only serious problem that you may face while upgrading the rig.

This variant of the MSI Trident X is thus quite powerful, and while there are better variants, the numbers are still great.

The RTX 2080 Ti variant remains a better choice for 4K gaming, but the RTX 2070 Super GPU present here is still a great option, even if you play on 4K.

With Windows 10 Home OS already installed, the computer is ever convenient to use.

The storage on this version of the Trident X 10SD is too something that you’d never feel problematic, and not just because there is a 1 TB SSD onboard.

You’d be happy to know that it has got two free 2.5” SATA bays that can be used for adding hard drives or SSDs.

There is also a spare NvME slot which you may use for adding another PCIe SSD module on the left side.

As for RAM, the motherboard supports two RAM modules, which are both filled, providing you with 32 GB of memory.

You can expand the RAM to 64 GB as well, but you’d have to remove a fan temporarily beforehand.

With the Trident X, the good stuff never seems to end, since there is lovable connectivity on this.

So, if needed, you would be able to run many monitors at the same time.

There is also a 2.5 Gb Ethernet port here, along with WIFI 6 and Bluetooth ready.

The RGB lighting present on the Trident X can be controlled by the Mystic lights software, along with those of the peripherals, which in this case are already provided alongside the rig.

The GK30 keyboard and GM11 mouse are good for an average user or gamer, but for any specific purpose, it would be better to buy after-market ones.

A standard warranty has also been provided by MSI.

What Do Users Think about MSI MEG Trident X 10SD?

The users of the MSI MEG Trident X 10 SD have quickly become fond of it, for reasons such as its slim design and the performance it offers.

They realized that it does not lack on any front, be it connectivity or upgradability. Check out MSI MEG Trident X Manual.

There are few devices that the buyers were able to identify that had such a small size, and even then, did not let the users down on performance.

The Core i7 and RTX 2070 set up in this particular variant was more than enough for all the tasks that the users wanted to do.

The Trident X was different from most gaming PCs in multiple ways, but the presence of the Thunderbolt 3 port is what sets it apart the most.

Now there are a few things that did upset some, but these depended on personal preferences.

The upgradability for example, though plenty for a desktop this size, wasn’t as smooth and easy.

It did not take special expertise to replace a part, but the small space did take some time to do them. The access to the internal components wasn’t tool-free either.

While those who have bought this variant specifically had no issues with pricing, some think that the upper variants shouldn’t have been as expensive as they are.

The experts at CNET like the MSI Trident X 10SD’s small design, good performance, and quiet nature. They like that the PC, even though small and compact doesn’t compromise on speed or performance, and is even kept cool under the workload.

As per PC Mag, the MSI Trident X packs powerful specs in a small chassis and doesn’t cost too much at the same time. Not only that, but it has also got Thunderbolt and WIFI 6 support, along with good peripherals. However, they feel that upgrading or disassembling the PC could be troublesome.

Those at Tom’s Hardware think that the MSI Trident X has got a lot of power in its slim case, and yet has got enough scope of upgrades. There is scope for upgrades, but you’ll be needing tools to open the chassis.