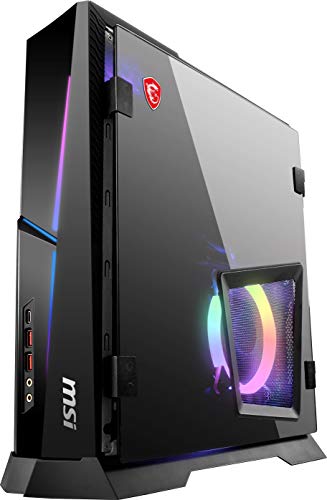 One of the great things about these desktops is that there is a lot of variety, and all the standard MSI hardware makes replacements and upgrades easier.

But this isn’t about all of those right? Precisely, and we would be focusing on the Trident AS 10SC-1208US, or more specifically, the one with a Core i7 processor and RTX 2060 Super video card.

Other specs of the desktop include 16 GB of RAM, SSD storage, and WIFI 6, all that you’d expect from a modern gaming PC.

The compact form factor of the desktop is surely one of the most interesting things about it, and if you look closely, you’d realize how good MSI has done.

For example, at the first look, you never would have guessed that it is a 10L chassis! And while upgrades are easy, you don’t have to deal with messy cabling inside either.

And while it doesn’t have top-of-the-line specs, the Trident AS is still very relevant if you’d want to take it to a competition, or play games more seriously than casually.

The very design, and its performance, which we would be talking about in detail soon, make sure of this.

Beware of: Small space inside the chassis restricts major upgrades

Best uses for: Gaming, X-Plane 11, video editing and such other games

The MSI MPG Trident AS 10SC, even though much smaller, performs as well and even better than a similarly configured mid-tower desktop. If you don’t plan to tamper with the internal hardware too much down the road and manage to get it at a reasonable price, this is a great desktop.

The chassis used in the MPG Trident AS isn’t something new, and MSI already used a similar one in its Trident X and Trident A desktops.

But, there are subtle changes too, like the replacement of the metal panels on the side with glass ones.

The older design required tools to open up, not very ideal for maintenance or upgrades for those who didn’t have them.

The newer glass panel, as is seen in the Trident AS, opens up like a door, which necessarily makes it easier to reach the internal components, while also makes the desktop look better.

The device is thus very slim and contains the MSI branding on the lower part, and some ports are placed slightly higher than it. The rest of the ports are at the back.

The placement of the components is where you’d see the most ingenuity, be it the way the GPU has been fitted, or the arrangement of hardware on either side.

Now all of this not only helps to keep the design compact but also ensures better cooling for each and individual component.

Also, there’s RGB on the front panel, and some of the internal components, along with the peripherals too.

All of this can be controlled by MSI’s pre-installed software.

But it isn’t overclockable, so the default turbo-boost is all you get.

The GPU is an RTX 2060 Super, which is a good video card unless of course, you compare it to the newer RTX 30 series GPUs.

It does have a VRAM of 8 GB and 2176 CUDA cores for quick graphics processing, and you get entry-level RTX capabilities as well.

Other than that, there is also 16 GB of RAM installed in this variant, which offers enough smoothness for all the tasks that most of you intend to do.

Due to the efficient cooling and these specs, the Trident AS scores fairly well in the benchmark tests.

As far as gaming performance goes, you can play most modern titles, be it PUBG or GTA V, and those that require VR compatibility, like X-Plane, etc.

But these are only a handful, while the desktop can handle tons of games and other software too.

There is a better variant too, with RTX 2070 Super GPUs, and a separate series of Trident AS’ has also been launched by MSI that features RTX 30 Series GPUs.

You can consider these too, if better video performance is what you crave, and the price-performance ratio of your desktop is important to you.

But make sure you make that choice early on since upgrading to a better GPU could be a bit of a problem.

Although the cards mentioned here come fitted comfortably, there is very little space left inside the chassis.

So, unless you manage to find a smaller variation, accommodating a bigger, full-sized video card can be an issue.

The MPG Trident AS may come with only a 1 TB SSD, but it still allows you to add more storage.

There are free bays in which you may install more storage drives and expand the overall storage capacity on your desktop, as per requirements.

There are 2 RAM slots on the motherboard, and dual 8 GB modules make up for the 16 GB of RAM present in this system.

And accessing both the RAM and storage bays are quite easy, which makes it very convenient to upgrade.

With up to 64 GB of RAM support, you never have to be short on system memory.

The design and performance of a desktop are important, and so is connectivity.

Fortunately, MSI covers all of these aspects in their gaming PCs, and hence the MSI Trident AS comes with the latest Bluetooth and WIFI features.

Combined with that are various ports present on the desktop.

The front panel gives you one of USB 3.2 Gen 1 Type-C and Type-A ports each, a USB 2.0 port, and headphone and mic ports.

So running multiple monitors and several devices at the same time, with the given specs and connectivity is only a matter of your discretion.

The MSI MPG Trident AS has a few preloaded software, and among them is a trial antivirus and the MSI Mystic Lights.

The latter comes into use when you need information about the system, or change the RGB lighting.

There are gaming peripherals too that come with it, which are quite good and have RGB on them which too can be controlled by the aforesaid software.

This desktop also supports the Nahimic 3 audio, which provides you a more enhanced surround audio experience with features like night mode, sound tracker, and so on.

The software makes both enjoying and creating content, or playing games a lot more entertaining and immersive.

A 1-year warranty is what comes with the PC as other MSI desktops do.

What Do Users Think About MSI MPG Trident AS 10SC?

There are very few desktops like the MSI MPG Trident AS that come with so many features, in a compact frame and an affordable price tag.

Among the users, there were some that had already used other MSI products or devices, so they had no confusion regarding the reliability and usefulness of this one.

As the users say, the chassis is much durable and on top of that, its slim profile and the ease with which it allows one to access the internal components are impressive.

And even more so is the way the components have been arranged. Check out MSI MPG Trident AS 10SC Manual.

And as for the way they perform, the buyers are quite satisfied with that as well. The Trident AS has mid-range variants only, and they perform the way that they are supposed to.

The intended frame rates in games and the overall performance made sure that the users did not have to regret their decision.

Also, since the desktop has excellent connectivity too, there were no complaints regarding this either. Fast WIFI, Bluetooth, dual USB Type-C ports, and all such features were very much loved.

There wasn’t much bloatware installed, and there aren’t any heating or noise issues either.

Whatever noise it did make under a heavy workload, the buyers were compatible with it.

However, some users would have preferred a better warranty span, and if there were Ryzen CPU options available.