MSI is an established name in the computer manufacturing industry. We discuss today about MSI Trident 3 gaming desktop review in detail.

It has brought us some outstandingly innovative PCs over the years. Of all the gaming desktops carrying its signature touch, MSI Trident 3 VR7RC gaming desktop 020US is the most stylish model. MSI Trident 3  Gaming Desktop Review will tell you the real story.

The maker claims that it is a console killer and we cannot agree with them more. If it comes to size, the gaming PC is no different from Xbox One S.

But on the performance front, the Trident 3 version is more powerful. After taking a look at its spec chart, you will immediately realize where it borrows its huge power from.

With the Intel Core i5 processor along with Nvidia GTX 1060 graphics punched into the system, the PC is intelligently designed on the surface and under the lid as well.

Its look is attractive and so its price tag. It is still one of the best models to lay your hands on. Check out best desktop PC according to needs. 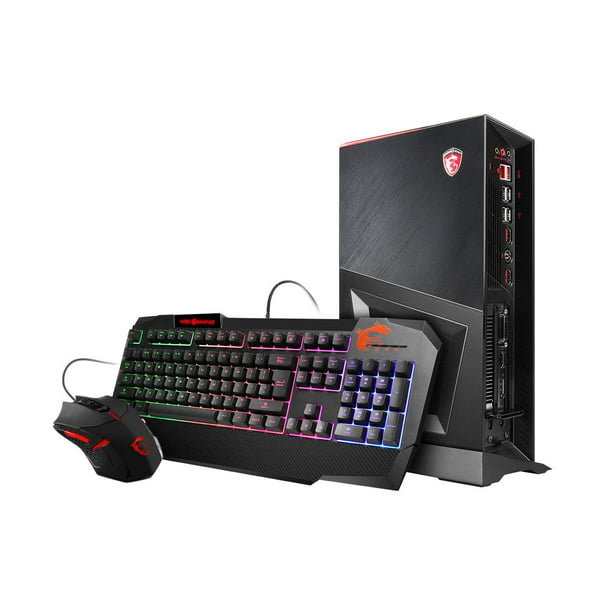 The gaming PC makers have been hell-bent on manufacturing a console-sized PC for a long time.

In the recent past, Intel and Nvidia have been successful in improving thermal and power efficiency and that has helped the PC manufacturers in achieving the desired result to some extent.

Yet, it remains a strong challenge for them to come out with a small rig that combines powerful performance and easy affordability.

In fact, MSI has also put in a lot of effort to come out with an effective recipe to make their dream true. Read more about best gaming pc this year. The company has now resumed its struggle. This time, they have tossed i5-7400 Quad Core processor and Nvidia GeForce GTX 1060 graphics in the Trident 3 VR7RC 020US.

MSI has slapped a higher price tag if compared with its close competitors. However, considering the mundane models rolling out every now and then, you will not mind opening your wallet for it.

Let us now get into the details of this gaming model to figure out if it is really worth attention of those looking forward to a more thrilling gaming experience. Find out our best desktop pc brand list. The one feature we disliked most about this gaming system is its power supply. It is a serious drawback of any compact gaming PC like MSI Trident 3 VR7RC 020US.

You need to consider the power supply of the parts that you intend to replace. It is up to an individual user if he/she will consider it a serious concern. Most users will love playing games on it at high-to-ultra quality settings.

We loved its out-of-the-box performance and hopefully, the users will feel the same.

MSI has packed Nvidia GTX 1060 and not 1080 (which is a higher-end version) in the Trident 3. However, that has not seriously affected its gaming performance.

In fact, the model still manages to give a tough competition to its compatriots. Designed to deliver a rich experience with high-quality settings, the compact gaming desktop will offer audio-visual pleasure to the enthusiastic gaming audiences.

Another impressive feature we noted about this Trident 3 version during our test is it is a silent performer even while handling heavy workloads. The fan is not noisy at all.

It produces little bit of sound but that will never sound annoying. The gaming PC is a perfect home entertainment piece.

With the GTX 1060 allowed to explore its full potentials, the Trident 3 managed to get through even under the rigorous 3D mark graphical test. Most games don’t throw a challenge to the CPU.

However, some games pile heavy stress on CPU while the rest put pressure on the GPU.

The Trident 3 is less likely to make it to the list of gaming echelons. Still, it posts good performance for many gaming enthusiasts who are still enjoying their online games at 1, 920x 1,080.

The VR-ready system is truly enjoyable whether you are playing alone or watching movies with your family.

However, a major concern and complaint about this gaming system is related to multiple pre-installed software. Norton security is a particular problem with constant pop-ups of notifications. Read more about 10 business computers. The compact gaming PC is aesthetically appealing. The manufacturer has mingled modern look and futuristic design in the same box. The design is not plain and simple. However, it is not garish either.

The RGB lighting feels pretty cool unlike what we see in other manufacturers’ systems. The prismatic style is the highpoint of its appealing design. The maker has stayed away from symmetric look and instead preferred asymmetric angles to make the design more interesting.

It is a small gaming PC. In fact, we have found it as one of the smallest models recently reviewed. This gaming PC clearly shows that MSI has made some striking improvement in every compartment of design.

The panels feel stiff and sturdy. On the downside, the panels are loosely put and that allows the light from the internal LEDs to streak through some nearly invisible spots. The gaming PC is outfitted with a 1 TB hard drive. That means the users will have plenty of space to save their works and games.

The HDD is sluggish in its move but it will allow the users to stack extra movies and games without requiring them to use a plug. MSI, unlike its competitors, seems to have composed a better idea in this regard.

The gaming PC comes with an 8 GB DDR4 RAM. That is good enough for quick booting. There are options for customization if you need it. You can upgrade RAM and other features to suit your needs. MSI has made the internal design of this gaming model quite impressive. The PC comes with a full-fledged processor and a dedicated graphics card. It is really interesting to note that the maker has integrated some interesting features into an extremely small sized desktop PC.

To be precise, the layout of MSI Trident 3 VR7RC 020US is amazingly straightforward.

Most components in the system, including GPU, storage drives and memory, are replaceable. To put it straight, you can replace almost anything except the processor. Read msi trident 3 user manual to get familiar with the product. The MSI Trident 3 will not fail to amaze you with what it has in store. The spec list offers some unique, interesting and fascinating features. The system is made to support Windows 10.

Inclusion of Nahimic sound system is an indication that you are going to enjoy a decent audio experience. Good audio quality of any gaming PC adds to visual delight for the users.

The VR port is anchored on the front side, offering an easy and quick access to the users. The PC teams up with a gaming keyboard and mouse. Download MSI Trident 3 manual. You will be getting total six (6) types of configurations of this Trident. Now its your choice to decide on to which config will be best to suit your imagination as a gaming console.

All these variants will empower you to unleash the real charm of going into the land of your imaginations. But clarify one thing that price also matter with each of the variants.

Our experts have talked to few users and compiled their opinion about this product.

The modern-day users are more in favor of simple and smart finishing. No wonder, the design of the MSI Trident 3 has won their heart.

This gaming PC runs silently and remains cool even after being in use for hours. The users have loved these features a lot.

Most users love to spend on a system that allows further spending according to their needs. For those flocks, this gaming model is an excellent choice.

This is because, MSI has made room for upgrade of almost every single internal component except its quad-core processor.

Visual experience comes with many delights as per the users’ feedbacks. The Nvidia graphics 1060 makes sure that you don’t miss the details while watching movies or playing games.

Commendable clarity and brightness take their gaming experience to a new height. Though the system suffers under heavy pressure or for some high-end games, overall execution is quite satisfactory.

The customers are more or less happy with its performance. It cannot be compared with the super-fast gaming systems and the customers are not expecting that at this price.

Still, it feels pretty good for them and they think that the system justifies its price tag. Whether you will buy or not is really up to you but some salient features make it worth the buyers’ attention. Let us first start with its design. It looks and feels like any premium system.

The solid structure does not look boring. The design is sleek and not sick. The ultra slim system is not a bulky model and that feels nice.

There are other strong reasons to love its simple yet stylish design. Yes, we are talking about its performance. It is not elite on that ground. Still we wore a happy look while playing games on it.

We played both high-end and mid-range games. For the latter type, it is brilliant. For some power-thirsty top-end games, it is not that much good.

Both audio and visual quality is good. The dedicated graphic card and high-end audio system make sure that the users fail to differentiate between on-screen thrill and real-life feel. That is definitely the winning point of this gaming PC.

The hard drive offers plenty of space for storing movies and games. It’s fine. Unfortunately, it is slow and that is a concern for some. However, that won’t produce much negative effect on its performance.

The system is not noisy at all and it remains super cool even you use it long. That is a good point as many high-end gaming PCs generate a massive amount of heat and produce much of noise.

The MSI Trident 3 is a compact and handsome gaming PC that you will love to buy for your home entertainment setup. It’s definitely not the best in the category of gaming desktops.

However, with high graphics setting and a dedicated graphic card, it offers much gusto to the game lovers.

We have already mentioned that we are not happy with its power supply. In fact, it is the major drawback of this MSI-manufactured gaming system. The power supply seriously affects its upgradability.

The good point is you can enjoy a lot with gaming at Ultra quality. To sum it up, the Trident 3 VR7RC 020US is one of the best gaming desktop models that you can place on your small computer desk or sit alongside your TV unit.

MSI has brought out a decent all-round performer in form of the compact box namely Trident 3 VR7RC 020US. The small form factor is an eye-catching feature of this gaming model.

With the market for such compact boxes growing at a rapid pace, you will get smarter and better alternatives at more or less the same price. The MSI Trident 3 gaming system is definitely not a refined model.

We are leaving it up to you decide whether you prefer good look, great performance or something in between.