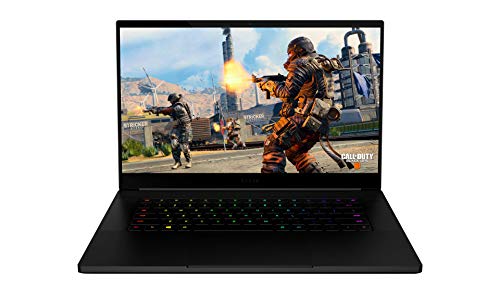 The Razer Blade RZ09 was once a prime example of innovation but may have lost its shine over the years, especially now given the current competition.

It isn’t primitive by any means, but given the newer options that one gets, and the latest iterations of the laptop itself, this variant is only worth it if you can get it at a low price.

A 4K laptop that can provide a satisfying performance is not uncommon today. Most major laptop brands have been focusing on this segment, and there are some great devices too.

But only a few of them, if any, are as compact as the Razer Blade RZ09. At the time of its launch, the brand proudly advertised this aspect, and it did the trick.

Although, the small form factor is not the only thing that these laptops are renowned for, as you’ll soon see.

This 2018 version comes with an 8th gen Core i7 processor, unlike the newer ones that have up to 11th gen options.

And while this gap does not equate to a massive performance gap, the newer GPU options do make a difference.

This one came with a GTX 1070 Max-Q, which was a great video card option for a gaming laptop at the time of the laptop’s launch, but not so much if today’s standards are considered.

The Razer Blade RZ09 launched back in 2018 certainly has its perks, but in no way can it compete against similarly priced laptops launched more recently.

Now there’s no shortage of performance, and the screen is good too, but the latter excel in almost everything other than that in a direct comparison.

Be it heat management, better hardware, or even the color accuracy of the 4K panel, these newer laptops are better choices.

The newer version of the Razer Blade RZ09 itself has only a handful, if any, of design changes than this variant that you’re looking at.

The difference is in the hardware, certain parts of the connectivity, and Razer has also tried to get rid of some of the drawbacks.

How successful their effort has been if you ask, well, that is up for discussion on some other day.

Instead, today we would be focusing on the device at hand, and let’s see if it still has value if you’re looking for a 4K or Ultra high definition laptop.

Beware of: Slightly older generation CPU in this variant │ Some important features are missing

The design of the 2018 Razer Blade RZ09 is one of the major attractions. But not just the overall form factor, even the display won’t fail to impress you.

The frame you get in this one is more rigid, and unlike the previous versions, is sharper as well.

This is one of the Advanced variants and hence is thinner than the base variants of the same device, which aren’t as powerful either in terms of hardware.

The overall build is great, and never once would you feel that you’re getting any less for the money you’re paying. At 4.53 lbs (2.1 Kgs), it is at par (if not lighter) with its competition, and some of the modern gaming laptops as well.

The 4.9 mm bezels on the 15.6-inch screen are quite thin too, so the viewing area isn’t compromised.

There is a bottom border that is thicker than the other sides, but that isn’t a concern either.

This is the 4K touch variant, though there were options with the 1080p panel with up to 144 Hz panel, meant for gamers.

While we are overall impressed with the quality of display on this, one thing we noticed is that it wasn’t very bright.

The 4K resolution does make colors and details pop out, but the peak brightness around 250 nits, isn’t that great.

The keyboard is decent, and the touchpad is huge. If you’d prefer a touchpad that sits in the center, then you’d like this too.

This version of the Razer Blade RZ09 with the hardware it has is not one to shy away from demanding tasks, or games.

Both the single and multi-core benchmarks are satisfying, and so would be your experience in real-life usage.

The laptop is configured with a Core i7-8750H processor, that has a maximum frequency of 4.1 GHz, and 6 cores.

No wonder why the benchmark results are such. Then there’s the GTX 1070 Max-Q which is an 8 GB video card, 16 GB of RAM, and an SSD to give the entire system a boost.

The 4K panel on this maxes out at 60 Hz, so you wouldn’t get any higher frame rates than that on it.

And while you’d want to get this, which is one of the best 4K or Ultra high definition laptops mostly for editing or rendering, the gaming experience isn’t bad at all.

You’d see 40-50 fps on most modern games at high settings, while tuning graphics settings, or playing some other title can give the full 60 fps too.

There’s also a gaming mode that makes the CPU and GPU work overtime to provide better fps, but there’s a problem here.

The performance, even without the gaming mode brings in heat, and a lot of it to be honest.

The temperatures recorded are much higher than the average and the fan noise also becomes noticeable, if not outright annoying, at one point.

Razer may have provided the vapor cooling system in this, but under workload, it doesn’t seem to work as efficiently as it is supposed to.

As a result, it wouldn’t be too comfortable to use it on your lap when you’re playing a game or doing something else that is intensive.

And not just the base, the keyboard, touchpad all of it tends to heat up quickly. This issue is something that the newer thin and light gaming laptops can tackle better.

The Razer Blade RZ09 that we are reviewing also comes with Windows 10 Home OS and is without any bloatware.

There is a 512 GB SSD installed in the laptop, and there’s an HDD slot too that can store up to a 4 TB SSD. You can replace the quicker SSD with a bigger one as well.

The 16 GB of dual-channel memory works at 2667 MHz, and though it is the quickest, the RAM does its part to contribute to the performance that you get on Razer Blade RZ09.

Both these are easily accessible and expandable once you open up the back panel, which is an advantage for the average user.

On the left side of the device, you’d get the power port, two USB Type-A ports, and the headphone jack.

Things get interesting on the other side, as there’s an HDMI port, a DisplayPort, a USB Type-A port, and a USB Type-C port with Thunderbolt 3 support.

Then there’s also Bluetooth and WIFI, but they are as per 2018’s standards, so don’t expect to get the faster, latest version of wireless connectivity on this laptop.

The Razer Blade RZ09 comes with an 80Wh battery, but the real backup from it is not that great.

Now sure it would last a small amount of gaming, or a 2+ hour-long movie for example, but you’d have to look for a charging port soon enough.

But on lighter usage, depending on whether you’re using WIFI and Bluetooth, and the brightness level, the device can last above 4 hours. Again, the kind of usage makes the most difference.

The AC adapter charges it up within 90 minutes and has enough wattage so that you can continue using the laptop for longer sessions plugged to power unless the heat reaches some extreme level.

There are anti-ghosting keys too. And although we wished it had better feedback, there’s no denying that the quality is much better than the previous Razer laptops.

There’s also the webcam on top, that allows you to video-confer with other people casually, and somewhat professionally too, as long as there’s enough lighting.

The speakers are certainly loud enough but aren’t that great with bass or low frequencies. These are clear though and the stereo experience is also decent.

The only software you get on this is the Razer Synapse which lets you change the RGB lighting on the keys and the performance modes on the laptop.

The laptop comes with a 1-year warranty, but at this price, some extended period would have been preferred.

What Do Users Think About Razer Blade RZ09?

You may have realized by now if you should get the Razer Blade RZ09 (2018) or consider some other option.

However, if you’re at all considering getting this particular device (given that you still find one), then this section of our review is one that you shouldn’t miss.

The slim form factor and even thinner bezels on the display did not fail to attract the user’s attention.

Many have preferred the 1080p panel though, over this 4K one which costs more. The touchscreen facility in this did benefit some of the buyers.

Now some were certainly disappointed as there aren’t things like a fingerprint reader, while others were more interested in the performance that this laptop offers.

The specs in this laptop, and the performance that it offers made it suitable for gamers, and even certain working professionals as well as content creators.

The CPU and GPU combination has proven to be suitable for a variety of applications. Check out Razer Blade RZ09 Manual.

But the heating issues in the laptop are something that has bothered most of the buyers, if not all. And the battery backup wasn’t as per their expectation either.

Now there are such other troubles mentioned above that the users of the 2018 Razer Blade RZ09, in general, have faced. But there are yet things like the multiple video ports and Thunderbolt support that were useful to them.

As per NoteBook Check, the Razer Blade RZ09 is a very compact device that performs well but has a few major problems like overheating, fan noise, a few missing ports, and so on. But when you compare it with other laptops that are as thin and light, only the Gigabit Aero is a direct competitor, which often outdoes the Razer in many things, and the battery life most importantly.

When the view of Laptop Mag is concerned, they consider the lower variants of the Razer Blade RZ09 to be worth it. It is not only slim and light in weight, but also has enough power to run some of the heaviest mainstream tasks there are. Now there are options from Dell and Asus with comparable specs and pricing that can be considered.

TechRadar considers the 2018 Razer Blade RZ09 to be a solid effort from the brand but has some very simple flaws that many other average gaming laptops share. Things like ordinary battery life, average keyboard, and such things often do not seem to justify the high price tag of the device.