What is Thunderbolt 3 Port?

A Thunderbolt 3 refers to a connector introduced by Intel in 2011. It is designed just like a USB Type C connector and can transfer several types of data at twice the speed of USB 3.0.

The design of the Thunderbolt 3 port supports DisplayPort and HDMI protocol, up to two 4K displays, and 10GbE fast networking. It is backward compatible and outputs audio and video signals at the same time. 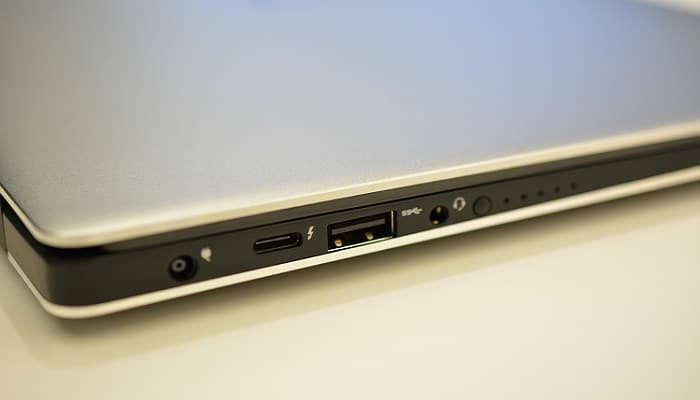 Thunderbolt is a brand name of the hardware interface created by Intel and Apple, and Thunderbolt 3 is a specific version of this interface.

The primary objective of it is to allow the users to connect several external devices to the computer.

The difference in design of Thunderbolt 1 and 2 with Thunderbolt 3 is that it reuses the USB Type C connector while the other versions use the similar connector as the Mini DisplayPort.

This port was developed and marketed initially under the name Light Peak.

At that time, it was designed with an intention to run on an optical physical layer exclusively by using flexible optical fiber cables and other components that were developed in Silicon Photonics lab of Intel by their partners.

As development continued, it was later revealed that using the traditional copper wiring would produce the desired data transfer speed of 10 Gbps for each channel but at a much lower cost.

After 2011, it was marketed as a Silicon Photonics Link and was sold first on 24th February, 2011 as a product for the end users.

When Intel and Apple took over, they not only retained the copper-based concept while designing Thunderbolt 3 but also included the optical interconnect technologies to make it even more efficient and faster.

Intel codenamed the Thunderbolt 3 controller as Alpine Ridge. The design of this interface was much better and consumed almost half power as compared to the previous versions.

When it comes to connecting external displays, it can support different types, numbers, and refresh rates. For example:

It also supports PCIe 3.0 as well as other protocols. It has power delivery ability of up to 15 watts on copper cables and none on optical cables.

However, it can integrate USB Power Delivery by using the USB Type C on copper cables.

This allows it to sink or source power as much as 100 watts. This means that you will not need a separate power supply from the devices when you use a Thunderbolt 3 port.

There are three varieties offered by Intel. These are:

Later, on 8 January 2018, Intel refreshed this interface and codenamed it Titan Ridge. This came with enhanced strength and supported DisplayPort 1.4.

It is also offered in three varieties as above but the new peripheral controller is compatible with a standard USB Type C port and performs as a USB sink.

The design of this Thunderbolt 3 port combines several things such as:

All these are offered through one single cable, even if you connect up to six peripherals with it across various topologies.

Through the connected DisplayPort and PCIe devices, the Thunderbolt controllers typically multiplex one or more separate data lanes to transmit through two duplex lanes.

It then de-multiplex the data for the devices at the other end to use.

Ideally, a Thunderbolt 3 port is interoperable with devices that are DP 1.1a compatible.

When connected to these devices, it can produce a native DisplayPort signal using four lanes of output data. The speed of such transmission for each lane is however not more than 5.4 Gbps.

On the other hand, when you connect a Thunderbolt compatible device, the same speed for each lane is almost double at 10 Gbps wherein the four lanes are arranged as two duplex lanes.

One of these two lanes is dedicated for the input signal and the other for output, both having a transfer speed of 10 Gbps.

You can also implement Thunderbolt 3 on PCIe graphics cards and on the motherboard as well.

However, to enjoy the benefits of the Thunderbolt 3 port and take the full advantage of this unique technology, which is relatively new, it is very important that you do know what to look for while buying.

This will prevent you from buying something that actually does not support Thunderbolt 3. These are:

Once you are sure of these things, consider the Thunderbolt 3 specs. It should use a 24-pin USB Type C connector, as per the industry standard.

It should also support the standards and protocols mentioned above.

The design of this platform is quite different from other ports and involves a hardware interface designed by Intel and Apple that allows you to connect different external accessories and peripherals to the computer.

It also succeeds the Firewire interface.

Thunderbolt 3 is the latest version of this interface which is different in power and functionality as compared to the other Thunderbolt interfaces namely, Thunderbolt 1 and Thunderbolt 2. For example:

The uniqueness of Thunderbolt 3 is that it typically uses very much the same design as the USB Type C connector.

The Thunderbolt 3 port will support the protocol of a DisplayPort as well.

This means that it will allow you to use a single cable to drive and daisy-chain more than one 4K display at 60 Hz refresh rate.

Apart from that, a Thunderbolt 3 port will also support several other things such as:

Another good thing about the design of Thunderbolt 3 interface is that it is backwards compatible as well.

In appearance, a Thunderbolt 3 port will look exactly like the USB Type C ports.

Even from the plug-in point of view, the connector is also physically the same. In short, it can do everything that any USB Type C port can.

However, it will be done at a speed that is much higher than USB Type C port.

This means that Thunderbolt 3, being a superset of USB Type C port, will allow you to plug-in a USB Type C specific device to it and will work just fine.

In addition to that, a Thunderbolt 3 port also comes with the ability to connect expansion docks and external monitors.

It is due to these capabilities and usefulness of the Thunderbolt 3 ports, that it has encouraged the companies to take the full advantage of it and incorporated it into the design of their computers.

Today you will see more and more Windows laptops and peripherals, such as expansion docks and hard drives that come with Thunderbolt 3 support as well.

The use of a Thunderbolt 3 port is so extensive and popular because of its features, of which the most significant one is its ability to transfer large data files at a much faster rate.

Add to that, its ability to use a USB Type C connector is also quite appreciable and useful. The different uses of a Thunderbolt 3 port can be enumerated as follows:

Therefore, with all these possibilities offered by a Thunderbolt 3 port, it can be rightfully termed as a game changer.

You will get up to four times faster data transfer speed when you use a Thunderbolt 3 compared to any standard USB connection.

Since Thunderbolt 3 has double the bandwidth of a Thunderbolt 2, you can use it to attach a graphics amplifier with it to upgrade the graphics and transform your simple laptop into a gaming rig because the speed will be just the same as if it were connected to the motherboard directly.

With a Thunderbolt 3 you will have more connectivity options. You can connect an external hard drive for storage, different external monitors, and other peripherals to your computer.

You can even connect any USB Type C device with this port as it uses USB Type C connectors and performs just like a USB Type C 3.1 port.

You can connect even two computers together and still get a high-speed and better networking when you use the Thunderbolt 3 port. The speed will be literally ten times more than any standard Ethernet port.

You will get enough power to charge your device because the Thunderbolt 3 port supports USB Power Delivery standard.

This will allow sending and receiving power up to 100 watts which is, in fact, more than enough to charge your laptop quickly.

Using the Thunderbolt 3, you can connect as many as six different computers and other devices to each other using the appropriate cables.

This technology provides you with three different options in one.

You will get a combination of DisplayPort and PCI Express in two serial data streams apart from a DC connection for the additional power.

Read Also:  What is Computer and Its 25 Major Uses?

The high bandwidth and low latency of this interface will allow graphic-based expansion and get high-performance when you even connect it to external graphics card units.

Basically, the support for USB C from Thunderbolt 3 as per the desired standards will future proof your computer and external devices and peripherals.

At the same time, it will also standardize manufacturing specs across the industry.

The ergonomics of Thunderbolt 3 seems to be right and makes it much smaller than the old versions.

It is also narrower and the cable is reversible. All these make it more convenient to use because the orientation will not matter for it to work.

The Thunderbolt 3 is much more flexible and therefore provides a lot of new and interesting possibilities.

It is vulnerable to Option ROM attacks which are loaded and executed as the Thunderbolt boots up.

These are itself pretty malicious and can even result in malware attacks your system even before the operating starts to function.

This can invade the log keystrokes and kernel to steal the encryption keys making it more vulnerable to attacks.

It can even overwrite the SPI flash ROM to affect the boot firmware of the system.

There are major security faults detected in the Thunderbolt protocol.

This allows access to the stored data in the computer to malicious parties even if the system has password protection, encrypted hard drive or is locked.

The worst part is that you cannot rectify it with a software update.

If you consider the cost factor, then this will surely be a much more expensive option, in fact, ten times as expensive as compared to other standard Firewire interfaces and USBs.

It is due to the use of a proprietary technology of Intel and Apple.

You will get fewer devices and peripherals that are compatible with Thunderbolt 3 interface as compared to USB.

Therefore, to use this technology, you will need to invest more to buy new devices.

It is also backward compatible with DisplayPort. This means you will need to upgrade old devices to use this new technology.

When it comes to daisy chaining different devices, using a Thunderbolt 3 port will support only six devices.

In comparison, a USB will support as many as 127 devices and Firewire will allow daisy chaining as many as 63 devices.

Since the Thunderbolt 3 looks pretty similar to the USB cables that support the USB Type C standard, you may think that all USB Type C ports will support Thunderbolt 3 or the cables are just the same.

This will lead to a confusion and you may end up making a wrong choice and not get the desired speed or functionality.

Therefore, it may not be suitable to be deployed by general users. This also increases its price.

The Thunderbolt 3 interface is also vulnerable to Direct Memory Access or DMA attacks due to the security issues in data transmission and connection.

This can, once again, install different types of malware into your system.

The Thunderbolt 3 provides some big advantages over the standard ports and cables. It streamlines things and allows you to stay more productive.

It offers dual-protocol and plenty of video bandwidth, apart from high-speed data connections. And yes, it is here to stay.