A drive bay, just as the name suggests, refers to that area in the computer where you can install a drive.

Typically, the drive bays in a computer are used to install a disk drive but you can also use other peripherals occasionally on these drive bays, depending on their compatibility.

Some of these peripherals are:

There are a few other interesting things that you may want to know about the drive bays, which are also referred to simply as a bay.

This is the article which is probably the best one to gain such knowledge.

In this article you will find the basic aspects of a drive bay as well as their different types, functions performed, where you may find them in your computer and the number of drive bays that you may use in your computer.

In short, this article includes everything that any average user needs to know about the drive bays in a computer. So, dive in.

What is Drive Bay in Computer? 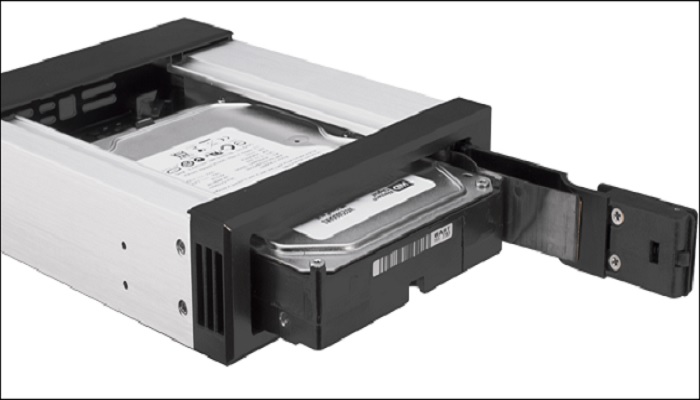 Typically, a drive bay signifies that particular area which comes with a standard size and allows installing a piece of hardware to the computer.

Typically, most of the drive bays found today are fixed in the inside of the computer case but there may be a few that can be removed.

Over the years, since the time when a drive was used in an IBM computer for the first time, there has been a significant change in the form factors of the drive bays.

Different types of drive bays were introduced since then but quite a few became obsolete.

Today, there are typically four different form factors of drive bays used in the modern computers such as:

It is good to know at this point that these names or measurements do not signify the width of the drive bay itself. Instead, these names typically signify how wide a disk can be mounted on these drive bays.

Typically, a drive in the bay is secured with four screws.

However, there are also tool-less fasteners commonly used today to hold a drive in a bay.

The required cables for power, data transfer and others are routed into and attached at the backside of the drive.

Normally, a drive bay will be just big enough to fit a drive inside it.

However, these days you will also find computer case accessories that are drive bay-compatible themselves.

This means that they typically do not need to connect to the power supply or to the motherboard at all such as the cup holders and small storage drawers.

However, with all that said, do not mix up the drive bays with the slots available on the motherboard or at the sides of your computer.

The slots are typically the openings in the computer wherein you can install the expansion cards.

Types of Drive Bays in a Computer

There are different types of drive bays available for use in a computer and typically, these types or form factors are defined on the basis of the standardized sizes of the drives.

A few of these types are not used now but here are all those for your knowledge.

These drive bays typically came with the following measurements:

The 8-inch drive bays were typically found in the early computers such as:

These 8-inch drive bays were the earliest type of drive bays, which are obsolete now.

These drive bays were typically used to hold the 8-inch floppy drives.

The 5.25-inch drives are the one of the most commonly used types of drive bays.

These usually are available in two specific variants such as ‘full height’ bays and ‘half height’ bays.

As for the dimensions of the 5.25-inch optical drives, these are stated in the SFF standard as well.

However, these have a somewhat shorter size and the sizes of their body as well as their bezel are also standardized.

The ‘full height’ 5.25-inch bays were up to 8 inches deep and were typically used in the older IBM personal computers and clones that were available in the early 1980s to mid-1980s.

The dimensions of these types of drive bays were approximately:

These ‘full height’ 5.25-inch drive bays were typically used for holding the floppy disk drives and the hard disk drives.

The difference between the name of the size of the bay and its width is due to the fact that it is named on the basis of the size of floppy disk that usually fitted into those drives, which was typically a 5.25-inch wide square.

These drives are typically used in the modern computers more commonly for the optical drives.

These drive bays are also considered to be the standard bays for housing the Compact Disk or CD drives and the Digital Versatile Disk or DVD drives in the modern computers.

However, in the earlier days, these ‘half height’ 5.25-inch drive bays were also used sometimes for holding other devices such as the floppy disk drives and the hard disk drives, especially those hard drives that had a capacity ranging approximately between 10 MB and 100 MB.

Read Also:  What is AHCI? (Explained)

Ideally, two half-height devices could fit into one full-height drive bay. However, these 5.25-inch floppy disk drives are now obsolete.

The 3.5-inch drive bays were originally used to hold the 3.5-inch floppy disk drives but, over time, these drives have become the normal size for the card readers.

Typically, the 3.5-inch drive bays are named after the dimensions of the diskette, just as it is done for their larger counterparts.

The actual dimensions of these drive bays are:

The drive bays that have an opening in the front of the case are usually used as floppy drives or Zip drives.

However, in the modern computers, it is the hard drives that are usually mounted on a fully 4-inch drives bay, which is technically 3.5-inch in size.

On the other hand, in most of the modern computers you will hardly find a 3.5-inch drive bay that is accessible externally because there is no use of a floppy disk any more nowadays.

Still, there are a few adapters that can be used to install a 3.25-inch device in a 5.25-inch drive bay.

These adapters are usually called a ‘sled.’

In recent times, however, a 3.5-inch drive bay is more commonly used for using memory cards and smart card readers.

It is also used for panels for additional USB ports.

These are included in the EIA 740 specification by the Electronic Industries Association.

The 2.5-inch drive bays are more commonly used to hold the hard disk drives and SSDs in the laptop computers.

The actual dimensions of a 2.5-inch drive are:

However, in most of the laptop computers, the specification of the drive bays is much smaller than 15 mm while the 2.5-inch hard drives may range between 7 mm and 15 mm in height.

There are two different sizes in particular that seem to be more prominent.

The laptop manufacturers use drives measuring 9.51 mm predominantly though there are a few high capacity drives in excess to 1 TB such as the 2.5-inch Velociraptor that are used now.

These drives are typically 15 mm in height and it is this increased height of these drives that allow accommodating better platters with higher data capacities.

There are several drive bays that are especially designed to be used in the laptop computers as removable trays where the hard drives can be mounted. This ensures easy removal and replacement of the drives.

Once again, the specs of the 2.5-inch drives are specified in the SFF standard specifications SFF 8200 and SFF 8201.

These are usually included in the EIA 720 specification by the Electronic Industries Association.

There are two particular specifications or form factors of the 1.8-inch drive bays. These are:

The actual dimensions of these two types of 1.8-inch drive bays are quite different.

On the other hand, the actual dimensions of the 54 mm × 78 mm form factor are:

Typically, these 1.8-inch drive bays are not only used in the small devices but are also used as add-ons for the game systems.

These are included in the EIA 720 specification of the Electronic Industries Association.

Where is the Drive Bay in a Computer?

The drive bays in a computer may be located internally or externally.

The external bays are those that a user can access easily without having to open the computer.

An example of an external drive bay is a disc drive.

This is usually installed in the external bay because the users need to insert a disc into it.

On the other hand, the internal bays, just as the name suggests, are usually found inside the computer case.

A user cannot access it without opening the computer because this bay is hidden and therefore cannot be accessed from the outside.

Usually, those particular hard drives that are not required to be removed are fitted into the internal bays.

As for the laptop computers, especially those of the earlier models, there were drives available for using removable drives in them.

These drive bays that were available in the early computers could be used for different devices and for different purposes such as for switching between disc drives and diskette drives. These bays could also be used for using an additional battery.

Add to that, in the earlier computers there were also PC Card slots available that allowed the users to add different devices such as:

Now, do not go out of the way looking for a drive bay in your current laptop computer if it is of the latest model because there aren’t any.

The modern laptop computers are typically designed without a drive bay.

Main Functions of a Drive Bay

The main function of a drive bay is to store the disk drives. However, in some cases, the drive bays can also be used for other purposes and as follows:

Apart from that, in a few computers there can be a small LCD system monitor mounted on a drive bay as well.

How Many Drive Bays Can be Installed?

Typically, in a desktop computer you will have two or three external drive bays.

Apart from that, you may also have one internal drive bay, if not a couple.

So, that is all about drive bays in a computer. With the knowledge gained from this article, you will surely not mix it up with the slots in your computer now.

Ideally, they both have different functions to perform and purposes to serve.