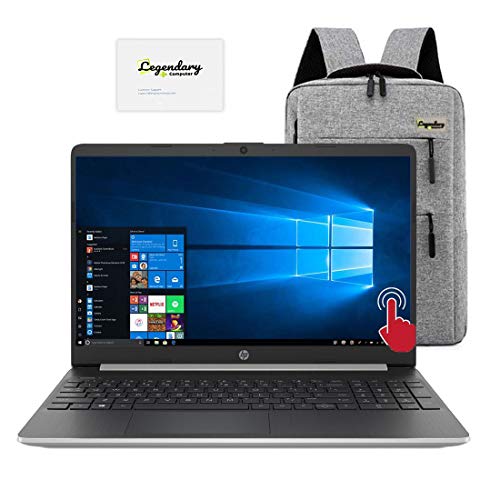 Read HP 2020 15.6″ HD touchscreen laptop review and see the price. Here we are with yet another HP laptop, and this one has got an additional touchscreen display for your convenience.

This is not a convertible though, but even then, the laptop could be of great use to you because of its efficiency and design.

The specs of the device are quite promising if one is looking for a mid-end device, due to the presence of a 10th gen Core i5 CPU, 16 gigs of RAM, a decently sized SSD for storage, and so on.

All of this comes at an affordable price tag as well, so even with an average budget, you may buy this.

There is an HD screen present on this and is large enough for a comfortable viewing experience.

Also, weighing 3.75 lbs. (1.7 Kgs) it is as heavy as any other 15-inch laptop, so it shouldn’t be a problem to carry it in your backpack to your college or office.

We have talked more about the laptop below, so give this review a look and you’d soon be able to decide whether it stands up to your expectations.

As far as general computing goes, the HP premium laptop with its touchscreen feature proves to be a very convenient machine over other devices. A typical 41Wh battery life still bothers us, among some other minor drawbacks, which need to be considered.

One of the reasons why the users prefer laptops is because of their light and compact nature, and the same is what you would find in this notebook from HP.

It has retained a similar design from the previous year’s model, with little changes. Check out best laptop brands.

This is the grey variant, while there is also a white one available. Now that does seem a bit more attractive due to the color scheme, but this too would be very suitable for most environments.

The bezels are average on the 15.6-inch display, neither very thin nor painfully thick, and the 81% screen to body ratio speaks for itself.

The build is decent, with silver coloring used on the outer portions, and grey can be seen as soon as you open the lid.

The keyboard has decent key travel, and the touchpad, big enough as always. There is a dedicated number pad on the keyboard too.

Of course, the most attractive part about this is that it has got a touch supported screen, which allows easy computing.

There is also a non-touch variant, among others with different RAM, CPU, and storage specs. You also get the option of buying an FHD display variant if you feel like it.

When talking about performance, you must know that although the processor has some potential, it is somewhat restricted by the absence of a dedicated GPU.

But those applications that rely on the CPU’s performance would not be affected.

There is a 6 MB cache in it, so you can expect quick responses. It has a TDP of 15W, like other processors in this segment.

As we said, there isn’t a dedicated GPU in it, but the basic graphical workload can still be handled well.

There is enough RAM as well, and you’d never feel a shortage of it while computing.

With 4 cores and 8 threads on the CPU, there are a ton of things that the laptop would be able to run.

While the overall performance of the CPU does not top the charts in benchmark results, it still has large improvements over the previous generations.

You can expect to run mildly-intensive software easily which includes moderate to heavy multitasking, various forms of coding, and so on. It can also be used for web development as both the CPU and RAM requirements are met.

There is an HD panel provided in this variant, so the sharpness and clarity of the display would not be as good as a 1080p panel.

There are average color accuracy and other attributes, which should not be an issue when you’re doing general things like running media.

An anti-glare coating does help your eyes when working lengthy sessions, but viewing angles are again average.

The operating system that you get is Windows 10 Home in this, although the option of the Pro version is also available at HP’s official website.

This variant has got a 512 GB SSD in it, which is of the PCIe kind.

Hence it is much faster than traditional hard drives and both SATA SSDs and HDDs.

The storage space suffices unless you need to store a lot of heavy files on your PC.

There is 16 GB of RAM present inside, in two 8 GB modules with the average frequency of 2666 MHz.

There aren’t too many ports on the laptop, with the left side having two USB 3.1 Gen 1 Type-A ports.

The other side features a USB 3.1 Gen 1 Type-C port, an HDMI port, a multi-card reader, and a combo jack for headphones and mic.

There isn’t a dedicated Ethernet port though, so unless you use a hub, wireless internet is your only choice.

Thankfully, that is available readily with 802.11 ac WIFI. Also, Bluetooth 4.2 allows you to connect your laptop to a variety of other devices.

HP has provided a 3-cell 41 Wh battery in this device, like most others in their non-gaming line-up.

While this may seem a bit low for heavy usage, with moderate use you might just pull through an entire day of work.

Battery backup on any laptop depends upon the user since not everyone uses their devices the same way.

However, for average usage like running the browser, document editing, and watching videos, you would be getting an average of 4-5 hours of runtime.

Using any one application heavily can bring different results, both positive and negative.

In either case, the 65W adapter and fast charging support come in handy.

The laptop has got a numeric keyboard and optional backlit support.

There is an HD webcam on top, along with integrated microphones for attending video calls.

HP provides a standard warranty of 1 year on it, which can be increased by purchasing a subscription at a nominal fee.

There is also a McAfee free antivirus trial present. Check out Best Laptops for Web Development.

There are two speakers as well but do not have any added tuning so they sound average.

The users who have bought and used this are much pleased with its performance.

A variety of them engaged in a variety of professions such as web development have used it for their daily work, and the laptop was very user-friendly.

This is partly because of the touch-screen display present, which allows for a more comfortable computing experience.

The wide display, ample storage, and RAM along with the CPU make it a quick and efficient laptop.

A majority of them have agreed that it is one of the most value-for-money devices that they have owned since very few such options are present that can offer the level of reliability and versatility as this one.

Some aspects had separate views, depending on the user, for example, some had no issues with the laptop not having an Ethernet port, while others did.

Another such thing was the battery backup, which was enough for some of the buyers, while others hoped for more.

So overall the laptop was widely liked and had almost no major complaints against it.

Those who needed a better display chose the 1080p variant, while the buyers of this particular one with the HD display were mostly satisfied.