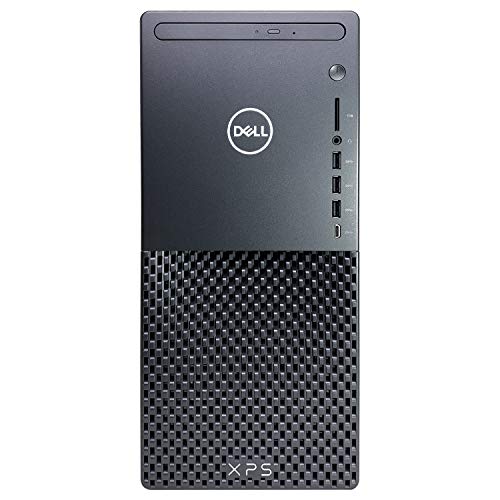 The Dell XPS 8940 has lots of advantages when compared to any other alternative of its kind, and while it is better than the older XPS 8930, there are some common flaws that both of these carry.

But given the general usefulness of the desktop, it is a great choice for you if you aren’t planning on any major upgrade or overclocking down the road.

If you knew about how useful the Dell XPS 8930 was, then you are sure to love the XPS 8940 that brings similar utility, but in a new chassis and added features.

The XPS line-up was never meant to be as powerful as the Aurora, but it does have enough potential, which is noticeable if you choose one of the higher variants, like this one.

One of the things in which the Dell XPS massively outdoes its competition is the number of configurations that it is available.

For example, you can start with the lowest 10th gen Core i3s, and with the recent update, there are options up to the highest 11th gen Core i9s available.

And that goes for the graphics too, since there are both options for integrated and discrete GPUs, with the latter going up to RTX 3070s.

And while the price tags of these higher variants can be steep when compared to the lower ones, they aren’t over-priced, to say the least.

There is another Special Edition of the desktop available as well, that comes in an even attractive white color scheme, and better peripherals than the standard XPS 8940.

Neither of these showcases flashy LEDs though, so you get a low-key setup.

Such configurability ensures that the desktop can be used by a variety of users in even diverse ways, all the more reason it is liked by many.

And not only do you get powerful hardware, but it is also of good quality at the same time.

Check out our review of the Dell XPS 8940 to find out if this is the desktop that you have been looking for.

Beware of: Proprietary PSU│ Even higher variants cannot be overclocked

The Dell XPS 8940 makes more of a subtle statement, unlike those bold gaming desktops with glass panels showing the RGB fans and stuff.

But make no mistake about its performance, which we have discussed in the following section.

You get two color schemes on this, the one that this one comes with, and the other Whitish variant labeled as the “Special Edition”.

While these aren’t unique per se, they do stand out from other typical black or white desktops.

The chassis is small, but Dell has taken enough care to allow enough airflow in this for normal to heavy usage.

This must be why the lower half of the front panel has a grill-like design, while the other half is solid.

There are several ports that you see here, below the power button, and the Dell branding is done here too.

The small size of the chassis also makes it lightweight, but the quality used to make it could have been better.

It doesn’t look dull when you see it, but on touching it’s clear that the build quality had chances of improvement.

Especially if one is choosing a top-end variant, the build feels cheap compared to the price being paid.

Among many other variants of the Dell XPS 8940, this one comes with a Core i7-10700 processor, a whole lot of RAM, and integrated graphics.

The processor is an 8 core, 16 thread option from Intel that can reach a speed of 4.8 GHz on factory overclocking which makes it good enough for handling heavy tasks.

Manual overclocking is not supported by this processor, though you may buy other variants that have CPUs ending with “K”.

Although these can be overclocked, the Dell XPS 8940 is not the ideal machine to do so.

This is partly because of the design, and they’re simply not enough cooling available to handle the increased temperatures that the processor may reach.

But this doesn’t mean that it isn’t efficient in normal conditions, and also, the desktop doesn’t make noise even under the workload.

The variant does not have a dedicated GPU, although you may add one if you need to, as long as it is small enough to fit, and is within the power standards of the 500W GPU.

It is not a standard unit, so you cannot replace the PSU, which means that after-market GPU addition is somewhat limited.

However, Dell has provided a variety of GPU options, starting from mid-range to high-end video cards that you may choose to put on your desktop when buying it.

Out-of-the-box, clearly this variant of the desktop is meant for CPU-intensive things like running various software, multi-tasking all day, vigorous number-crunching, and so on.

Add a GPU, and you can also use this for gaming, as long as you can manage to put another cooling fan or two in the case.

If you need so, the Dell XPS 8940 can be configured to handle graphics-dependent tasks as well, and that’s why it is so useful.

There are options for both Windows 10 Home and Pro versions, though this one has the former installed in it.

For primary storage, you’d be getting a 1 TB hard drive, but don’t be disheartened yet as an M.2 SSD can be added.

But there is only a single M.2 SSD slot though, and the system supports up to 2 TB of NvME storage, so choose the size of the drive wisely.

Other than that, there are two 2.5” bays and one 3.5” bay free that you can use to install SATA drives, and that too having 2 TB of storage capacity each.

The RAM present on this is 64 GB, so do all the CPU-intensive things that you want as the computer is well-equipped to handle them. This desktop also comes with 16 GB and 32 GB RAM variants.

There are 4 UDIMM slots on the XPS 8940, each supporting 32 GB modules, so providing you with a total of 128 GB system memory at most.

The RAM operates at a frequency of 2933 MHz.

The XPS 8940 has many good things, but one that needs praise is the connectivity that it offers.

You get everything that you need, from a USB Type-C port, Type-A ports, audio ports, a card reader, and others like an Ethernet port and an optical drive.

Another chassis option removes the optical drive, but this one here supports it.

This variant misses a dedicated video card, due to which there is only one HDMI port and one DisplayPort available on this. Adding a GPU would let you add more monitors.

For the Wireless kind, you get Bluetooth and WIFI ready to use, but these aren’t the latest versions though.

The Dell XPS 8940 comes with accessories, which aren’t extremely good but get the job done.

There are no speakers inside the chassis, so you’d have to buy these separately if you need audio in your setup.

A McAfee free 12-month subscription has been provided with the desktop that you may or may not renew.

A 2-year warranty is also present on this particular device.

What Do Users Think about the Dell XPS 8940?

Just like the previous XPS 8930, the Dell XPS 8940 also has a lot of popularity among the users.

One of the reasons for this is the several configurations in which the desktop is available, and hence everyone from students, to professional users, office users, and even gamers and content creators found the use of this desktop in their daily lives.

The desktop starts from lower models and goes up to Core i9s, and even the latest 11th gen Intel CPUs are available for purchase.

So providing robust performance if needed is never an issue with the machine.

Users found that there are discrete graphics options along with the regular integrated ones, which meant that not just CPU processing, the XPS 8940 can handle graphics too, and heavy renderings at that.

High-end RTX GPU options have made sure of it. Check out Dell XPS 8940 Manual.

And not just these hardware, the desktop also comes with brilliant connectivity and this was something that the buyers loved very much.

There is no scarcity of ports, and these are rightly distributed between the front and the backsides. This along with the optional WIFI 6 made it even more convenient to use.

With so many good things, there are some bad things too that have been reported.

The compact size of the chassis surely is a strong reason why people have bought it, but at the end of the day, it did pose some problems when trying to install bigger GPUs.

While you can buy a powerful desktop right away, the options of expansions and upgrades are limited.

Like there is only a single PCIe slot for an M.2 SSD, the proprietary PSU cannot be replaced with after-market ones, and so on.

Other inconveniences were minor, but one of these that must be mentioned is the build quality of the desktop.

Not that it is fragile, but for the price segment that it is available in, more importantly, the higher variants, the users had expected more.

This was more noticeable since there are cases that can be bought separately that have got better quality than this, and these don’t cost much either.

The experts at PC Gamer have found that the Dell XPS 8940 is a very useful desktop that can be used for both work and entertainment. It has a compact size, does not make irritating noise or heat, and many other good things. However, they would have preferred if the price tag of some of the higher variants was a bit lower than they are in reality.