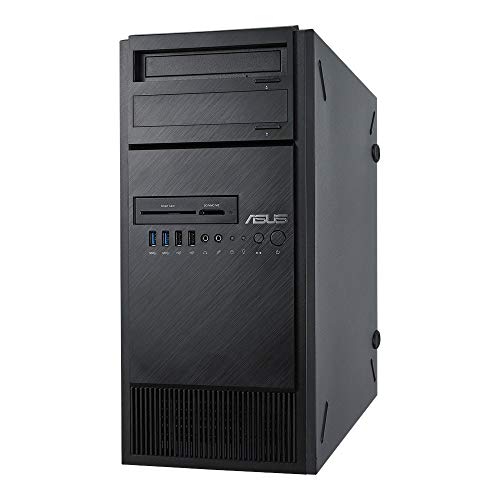 Read Asus E500 G5 Workstation Review and see the price. If you know about pre built desktops, then you must also know that there are more powerful machines than a gaming rig that you can buy already configured.

Workstations, like the one we are reviewing today, aren’t for mainstream usage. These are meant for professionals and such applications that require extensively reliable hardware.

Almost every major manufacturer like Dell, HP, Asus, and even Apple have some sort of workstation that you may buy.

The Asus E500 G5 is one such 9th gen desktop that you see here today. One of the great things about it is that it isn’t as bulky as you’d expect a workstation to be.

Furthermore, it has got ECC memory, Xeon processor options, multiple-GPU support, and a lot more features that you can expect from a decent workstation.

As for the configuration of this one, in particular, you get a Xeon E2200 processor and the cabinet only.

To use it, you’ll have to install the various other necessary components like the RAM, storage drives, and so on.

And while it may seem unfair at first, the kind of customizations the desktop offers could be useful too.

ASUS provides several hardware options, which you can configure the desktop with at the very time of buying it, or choose one of these and add whatever you wish to later on.

But again, the average user does not have the kind of tasks that the desktop is built to do, so not everyone should find this desktop relevant.

Those of you that do have the need, on the other hand, must consider this as an option.

Buy for: Workstation-grade performance │ Ample scope of upgrades | One of the best desktops with a Xeon processor

Beware of: Can be expensive

Best uses for: Engineering students and other purposes.

The ASUS E500 G5 isn’t the kind that you’d want to play games on or edit videos for a social media platform. Instead, it is capable of providing the kind of reliability and security that one needs for professional usage. Even though it is entry-level, it is surely a good workstation.

One of the perquisites of a workstation is that it needs to be easily maintainable.

ASUS has been in the business long enough to know this, and hence their workstations are conveniently designed.

The E500 G5 is essentially a workstation, hence, getting access to its internal components is fairly easy.

The chassis comes in black and is claimed to be very durable. Now we do not know exactly how durable it is since physical testing is not our niche.

But we can say that it is built better than the average desktop, from other brands and ASUS itself.

And not just the chassis, the motherboard, and even the PCIe slots have been provided with superior protection and durability.

So the expensive GPUs or other components that you choose to install on the desktop are kept safe.

There are some unique features in it as well, like the system lock feature, which allows you to secure the chassis.

This removes the chance of a potential threat of any internal component.

There’s also the intrusion alarm, which lets you know if anyone has opened the chassis.

The usual consumer may not need such security, though when working with sensitive data, these are very practical features.

On the front panel, you’d see a series of ports, buttons, and LEDs, and the optical drive should you choose to have it.

The variant we have here is one of the many options that ASUS officially provides.

You can get The ASUS G5 with one of the Xeon processors, or Intel’s 8th gen CPUs, which are more consumer-centric without ECC memory support and all that.

Now, this desktop is one of the entry-level workstations, so the Xeon options are limited to a few of the Xeon E-Series.

In this particular variant, you get the Xeon E-2200, an 8 core, 16 threaded server-grade processor.

These processors do not come with Integrated Graphics, and the desktop doesn’t have any discrete GPU installed in it either.

However, it supports not just one, but more than one video card, and you can even get one of the professional ones.

Both NVIDIA and AMD have high-end dedicated video cards for professional applications, like advanced video creation, 3D rendering and CAD, and all those things.

These are only possible in workstations such as this and are too heavy to handle for average desktops.

And with a decent enough GPU, you can use the desktop for other things that require much graphical strength.

Certain things in the financial sector, and machine learning, for example, rely more on Core count, system stability, security, etc, which are ample in the ASUS E500 G5.

Also, it has got an ISV certification too, so you should have no issues working on software like AutoDesk. ASUS provides both Windows 10 Home and Pro versions with this, the latter more preferable to be used with this desktop.

So no doubt this is one of the best desktops with a Xeon processor in it which you can get today.

There is also the card reader which supports different kinds of portable, card-based storage devices.

The desktop can handle up to 3 displays at the same time, and one each of the HDMI, DisplayPort, VGA, and DVI ports are provided for this.

And depending on which GPU you choose to use in this, you would get some additional ports as well.

The dual Ethernet slot on the ASUS E500 G5 workstation offers increased bandwidth, which comes in handy in those things dependent on a robust Internet connection.

Among other software that is pre-installed in it, there is also the ASUS Control Center, which is essential to get data about the desktop.

This data can be accessed through the app from some other mobile device, such as your smartphone.

The desktop also comes with certain features that make it further useful and secure, when employed in a small business or any such financial sector.

And, it has got everything that you’d need for professional-grade graphics development.

There are 3 PSU options, a 300W, 500W, or a 700W unit, depending on the kind of GPU that you plan to add. So adding professional video cards with high TDPs to this workstation is very much possible.

We would suggest you get the 500W, if not the 700W, from the very beginning so that a GPU upgrade can be done smoothly.

What Do Users Think About the Asus E500 G5 Workstation?

Prebuilt workstation buyers are lesser in number in comparison to consumer-grade buyers.

However, their numbers have increased in recent times due to good options being provided by the different brands.

The ASUS E500, as you may have read our review, is a good option, but its user reviews are also important.

The buyers have liked its design and the fact that it isn’t too heavy or big in terms of dimensions.

And even then, it supports tons of hardware, along with a lot of scope of expansions and upgrades.

There were no major complaints performance-wise, and the reliability of those with Xeon CPUs is indisputable.

Also, those that didn’t need the features of a server-class processor went for the more mainstream Intel Core options, and they weren’t disappointed either.

An excellent GPU support meant that this workstation could be used by the users for a variety of purposes, both professional and non-professional.

Moreover, the device comes with very essential security features, which meant that the buyers didn’t have to worry about their data.

But even with all those, some wished that the price of the desktop wasn’t as much as it is. Check out E500 G5 Manual.

This isn’t a very strict drawback as workstations are expensive devices, irrespective of the brand.

But some better Xeon options would have impressed a few of the buyers even more.