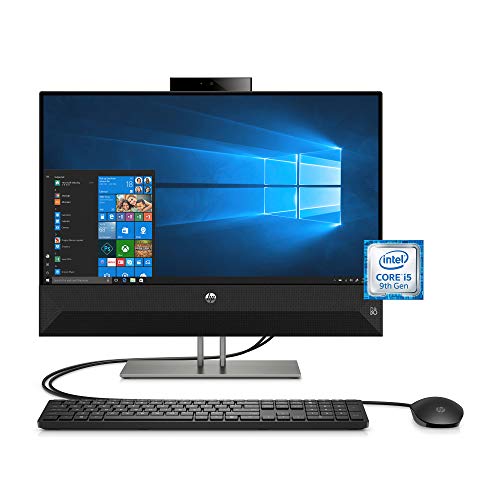 Read HP Pavilion 24-Xa0032 AIO review and see the price. If you ask me, for mild usage I’d prefer an All-in-One over a tower desktop any day, no matter how small the latter may be.

An AIO is as close as it gets me to a laptop, and no more having to allocate space for the processing unit separately.

For someone that thinks like me, the HP Pavilion 24-Xa0032 is a marvelous device.

Now it may not be as powerful or as attractive as some of the others of its kind currently available, but it is still very interesting.

One of the reasons for this is that it comes from a reputed brand, and among other things, the desktop packs some excellent features too.

And while some of you may like the pop-up camera, others would be impressed by the touch screen display.

The processor that it has is a 9th gen Intel mobile CPU, but you’d be amazed at how quick it is when handling day-to-day activities that one usually does on a computer.

And while it may not have a high-end dedicated video card to flaunt, there’s still an option for entry-level graphics.

And if you thought that was it, wait until you use the speaker on this AIO. It has one of the best-inbuilt speakers that you’ll ever hear, and that is certain.

So today we’ll be reviewing this device, and hopefully knowing about this would be as fun for you, as it was for us.

Beware of: Not very upgradable │ Not suitable for graphics-intensive applications

Best uses for: Engineering students, Lawyers, family use and other purposes.

The HP Pavilion 24-Xa0032 is a very practical, versatile device that you can use both for work, and relaxation in your downtime. It may not have any such luxuries that other expensive AIOs do, but you’d be impressed by the basic features it packs.

The HP AIO comes with very minimalist looks, and you’ll love it if you prefer simplistic designs.

There isn’t any special color scheme for the AIO or different screen orientations, but the unit looks decent sitting on the grey stand.

You may remove it as well if you can manage to place the device somewhere without it.

So this has got a Full HD (1080p) IPS panel, and this is one of the touchscreen variants, as we said.

The 23.8-inch display is big enough, and bright for the average user operating the AIO indoors.

It has a wide-viewing angle as well, so no matter where you sit, every time you look at the screen, the experience is consistent.

The aluminum stand is well-built so keeps the entire unit stable, and the same can be said about the overall desktop too.

And this becomes very important since you wouldn’t want the desktop to wobble every time you tap somewhere on the screen.

The bezels are not the thinnest, but in real-time usage, they don’t bother you at all.

The webcam pops up from the upper part when you want it to, and on the lower chin, you get frontward speakers.

How well do they sound? Well, we have talked about this in the upcoming sections.

There aren’t any ports at the front, so no cables to bother you. But if you are comfortable with a few ports close to you, you might slightly be disheartened.

Having said that, the ones at the back can be reached with minimum effort though.

This is a previous generation of Pavilion 24 AIOs, you wouldn’t see the latest Ryzen or Intel processors in any of its variants.

But since it has a Core i5-9400T processor, we wouldn’t consider it old at all.

This is a hexa core CPU, but doesn’t support hyperthreading, and has a maximum frequency of 3.4 GHz.

This is a budget option, so you do not get a dedicated GPU on this.

Intel’s Integrated Graphics is what handles all the video-related stuff, and works just the way it is supposed to.

There are Core i7, and Ryzen 7 variants as well that you can consider if you’d like better performance.

Also, you can get one of these with an entry-level video card installed, which should boost the graphics performance by some margin at least.

But just because it doesn’t have a dedicated video card doesn’t mean that it doesn’t run well. It is a very responsive desktop that can handle a lot of software.

That is mostly because of the specs it has, and also partly due to the Windows 10 Home OS that is already installed in the device.

Let me give you an idea. Say you’re an office worker, that has to work with multiple excel sheets, emails, other software, or you’re an engineering student, who has to do lots of calculations, create diagrams, and so on.

The desktop is a very suitable device for either of you.

And, after you’re done with your work or studies, you’d like to watch some movies or a TV show.

With the wide, touchscreen display, it becomes as easy as doing the same on your smartphone, but on a much bigger screen.

The storage space available on the AIO is not a lot but should be enough for most people.

The 512 GB SSD is quick, which makes the desktop function smoother in certain situations.

The 12 GB of RAM available on the desktop too should be great up to moderate usage, after which you might have to upgrade.

There are 2 RAM slots, and in this case, they are both occupied.

This AIO has got several ports, and as we said, these are all placed on the back panel.

Starting from the left, there are a headphone jack, an SD card reader, 2 USB Type-C ports, 2 USB 3.1 Gen 1 Type-A ports, an HDMI out, and an HDMI input port.

There is also an Ethernet port beside the power jack.

So this means that alongside using another display with this desktop, you can also use it as a display for another desktop, laptop, or such a source.

And don’t miss the WIFI and Bluetooth available on this either, since these are much needed, and hence have been provided too.

The HP Pavilion 24 has got a pop-up webcam, and on the same piece, you’d find a microphone as well.

This helps to preserve your privacy when the camera is not in use.

The dual speakers are tuned by Bang & Olufsen, which provide a good sound output, both in terms of loudness and clarity.

Now dedicated speakers might be better for a bigger room, but enjoying a video or a movie by yourself, or a few others, should be good on these prebuilt ones.

A standard 1-year warranty has been provided on this desktop, and its customer service does not need a separate introduction.

The HP Pavilion 24-Xa0032 is not just a great device but is also backed by a lot of positive feedback from its users.

People have shared both their first impressions and the kind of experience they had when using the desktop for a longer amount of time.

Now if you judge it solely based on how it looks from the outside, you’d have a very different impression.

But how good it is can only be understood when you start using it. This is one of the things that many users have faced.

They mention that although it may not be the best in terms of looks, it certainly performs better than the computer they have replaced with this.

And even then, the slim design and cable management offered by the AIO was useful to the users.

The display quality especially was something that received a lot of praise. Check out HP Pavilion 24 AIO Manual.

Its performance had a few complaints, and its spec sheet was the very reason people considered it in the first place.

Both the Core i5 and Core i7 variants have been chosen by the users, based on their requirements.

And those that needed better graphics went for the variants with dedicated GPUs and weren’t disappointed either.

The same can be said for the connectivity that the desktop offers and all the important ports and slots were included.

But this doesn’t mean that the desktop is free of any flaws. Freezing issues have been often reported, and the build quality of the webcam was also not up to the mark.

HP is a reputed brand that did solve most of the issues, but the inconvenience faced by some of the buyers cannot be ignored though.

As per Digit Week, the HP Pavilion 24-Xa0032 is a desktop suitable for both work and entertainment. It has got a quick processor, a speaker that sounds great, and the right connectivity too, but lacks a bit in the looks department.